It's better than Batman.

Spiders get a lot of bad rep, and most of it is completely unwarranted. After all, they’re much more like pets than we’d care to consider. They’re small and fluffy most of the time, and like a guard dog, they keep intruders out of your house — intruders, in this case, being unwanted insects. As it turns out, they have something in common with cats too: they love chasing laser pointers!

I could watch this on repeat for hours.

We have scientists on Twitter to thank for this discovery, which as it turns out, was common knowledge for some (completely new to me though).

It all started with Jamie Lomax, an astronomer from the University of Washington. Lomax spends most of her work time looking at massive objects far outside our solar system, but one time, she found herself interrupted by something much smaller, and much closer.

The sudden appearance of a jumping spider on my laptop is a good way to stop my workflow.

“I’m not scared of spiders but if someone else wants to take care of the spider in a room, I’ll gladly let them do it over me. And I don’t really want them raining down on my head,” she told The Atlantic.

She identified the species as a zebra jumping spider, a common jumping spider of the Northern Hemisphere. Like other jumping spiders, it does not build a web, instead relying on its eight large, keen eyes to scout prey. Zebra spiders are rather unusual in that they have often been noted for noticing human presence and reacting to it. You could see them lifting their head towards you and behaving completely different afterward.

But for Lomax, the problem was that there were plenty of tiny spiders around, and not much to do about it (by the time a university exterminator came, they were gone, indicating that a nest had probably hatched and the spiderlings had scoured in the meantime). But someone had a different idea of dealing with the spiders: laser.

No, no, I don’t mean “nuking” the spiders with lasers, I mean using lasers to distract them and direct them in the direction you want. It all happened when fellow astronomer Alex Parker chipped in.

“Have you tried lasers?” he replied. “Seriously though, some jumping spiders will chase laser pointers like cats do.”

You could almost imagine Lomax sitting in her office, reading the tweet and going “Woaw.”

By this point, Emily Levesque — Lomax’s colleague, with an office two doors down — joined in. She tried the same thing using a red laser pointer, but the spider seemed much more attracted to the green one.

Now, they were really intrigued. What makes spiders first attracted to laser pointers, and second, more attracted to green lasers than red lasers?

“Do all zebra spiders react more to green vs red laser pointers?” Levesque tweeted. “We need some kind of ‘science Twitter’ bat signal that we can put up when different fields need input from one another.”

But on the internet, you don’t need a bat signal, and Twitter worked its magic once more. Spider researcher Catherine Scott saw the thread and looped in her friend Nate Morehouse, who specializes in spider vision at the University of Cincinnati. It was pretty late at the time, but Morehouse was up watching the Stanley Cup (ice hockey). He was upset to see his favorite team, Pittsburgh Penguins, losing to the Nashville Predators, so he randomly checked his Twitter to see if something was up.

“I was all bummed out, and I decided to check Twitter before I went to bed,” he says. “I had like 150 notifications.”

Like a true science Batman, he swooped in and explained the whole thing. It’s all about the spiders’ eyes, Morehouse explained. Their retinas contain two type of light-detecting cells: one sensitive to green light, and another sensitive to ultraviolet. They can also see red light, but they probably see it as a fainter shape of green rather than a new color. Since they rely on vision to find prey and they have to act fast, it makes a lot of sense for the spiders to chase the pointers.

As it turns out, you can find lots of similar clips on the internet. 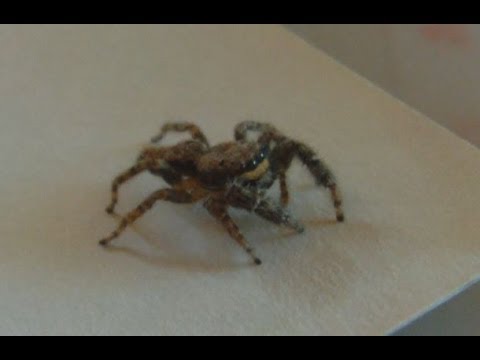 But if you have to appreciate the power of the internet. Late night, a Cincinnati biologist heard the call of two Washington astronomers who were using laser pointers to play with spiders. He explained the thing to the entire world, and now you’re reading about it from wherever you may be. I don’t know about you, but that sounds better than Batman to me.