Juvenile Great White Shark Gets Stranded on the Sand, Rescued by Beachgoers

by Alexandra Gerea
in Animals, News, Videos
A A

We’re more used to whales washing up ashore, but sharks also do it sometimes. This juvenile shark was apparently trying to hunt some seagulls and ventured out of the water too much for its own good. However, after struggles and apparent dehydration, the shark was saved by beachgoers. 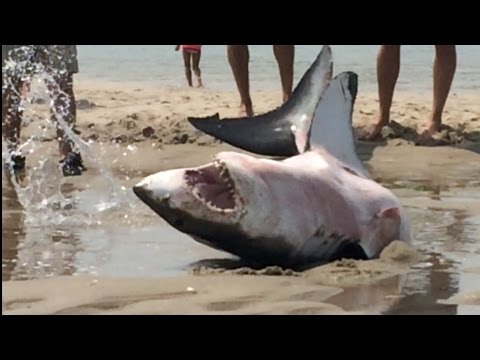 Initially, we see the two meter shark (7 feet) struggling as people on the beach just watch. However, animal rescuers and the harbor master arrive shortly, throwing buckets of water on the shark to rejuvenate it. After a few tense moments, the shark starts to move again, to the applause of by-standers. The shark is then tied up and dragged by boat to the water, something which might seem violent but is completely harmless to the animal. Furthermore, the creature is also checked for injuries before being released once more to the water.

The video was uploaded by Mike Bartel this week (July 13), who said, “Thanks to the harbor master and beach-goers, this shark was saved.”

Despite its fearsome appearance, the great white shark almost never attacks humans – contrary to popular belief it doesn’t mistake humans for seals and it doesn’t seem to like how we taste. According to the International Shark Attack File (ISAF), between 1580 and 2013 there were 2,667 confirmed unprovoked shark attacks around the world, of which 495 were fatal – and that’s almost five centuries. This doesn’t mean that sharks aren’t dangerous or they can’t attack humans, just that this happens extremely rarely. It’s actually us that are threatening sharks, not the other way around: The great white shark is listed as vulnerable by the IUCN Red List, but it is on the cusp of being labeled endangered due to overfishing.