by Tibi Puiu
in Renewable Energy, Videos
A A

Enercon‘s E-126 turbine towers 125 meters high and can generate a staggering 7.58 MW of electricity. As of 2012, 147 such turbines have been installed all over the world. This video shows the non-trivial process required to install and operate an E-126 turbine — the most powerful in the world. 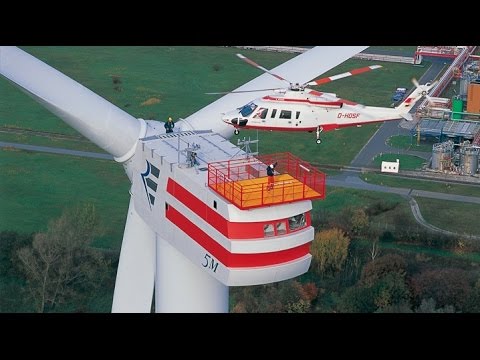 To counter the huge forces exerted by the turbine’s blades, the E-126 needs a solid, 2,500-tonnes foundation. Though very expensive, priced at $12 million without installing costs, large turbines are considered more cost-effective, if the wind conditions are ripe of course. You’d need to install three turbines to get the same output, which means you need more crew members and more labour in the foundation and installing work. Manufacturing per unit KW is also cheaper.

Because it’s so big, the E126 only turns 12 times per minute — ample time for birds to dodge the revolving blades. Birds killed by wind turbines are a big concern, but not with the E126. Even one single E126 can provide enough power to meet the needs of an entire small town. Engineering at its finest!