The uneasy story of how the Great Auk went extinct

A burning reminder of how mankind can drive species to extinction.

by Mihai Andrei
Reading Time: 8 mins read
A A

The last Great Auk was killed by three fishermen in 1844. They hunted it, tied it to the ship, then stoned and crushed it — out of superstition.

It was a tragic yet fitting ending for the flightless, penguin-like bird hunted to extinction in Northern Europe and America.

The Great Auk emerged as a species some 5 million years ago, way before ancient humans started roaming the land. They look and behave a lot like penguins, although they’re not related at all. Great Auks measured 75 to 85 cm (30 to 33 in) tall and weighed about 5 kg (11 lb), with a black back and a white belly. They had puny wings which rendered them unable to fly — but the auks were extremely agile in the water.

Auks were never really observed and studied by modern scientists in the wild. Most observations come from laymen such as sailors, so its behavior is not well known and difficult to reconstruct. However, from these simple observations, as well as by studying its closest living relative — the razorbill — modern scientists have a decently good idea about how the bird behaved. It was an excellent swimmer, using its wings to propel itself underwater, where it hunted fish. It could hold its breath for up to fifteen minutes and was able to dive at least 70 meters deep (240 feet). Some had been spotted 500 km away from any landmass, at sea.

It had few natural predators, and almost none of them came on land. Its most common predators were likely killer whales (orcas), polar bears, or white-tailed eagles.

But for all their remarkable ability at sea, they were clumsy and slow on land. They also had no innate fear of humans — which makes sense, as their natural predators were all very different from humans. This, however, ultimately brought about their demise. 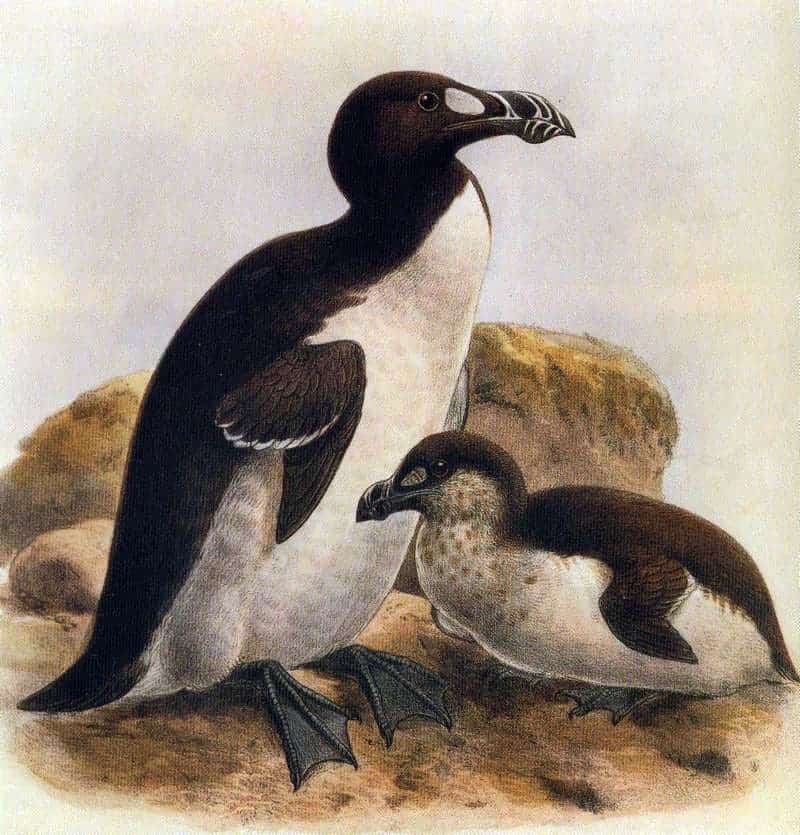 Great Auks were hunted by Neanderthals as early as 100,000 years ago, as evidenced by well-cleaned bones found by their campfires. Sketches of Great Auks were carved into the walls of the El Pendo Cave, in Spain and Pagliacci, Italy more than 35,000 years ago. So humans have been eating Great Auks for a long time.

More recently, a grave dated to 2,000 BC was found in Newfoundland, Canada, surrounded by more than 200 great auk beaks, which are believed to have been part of a suit made from their skins. The now-extinct Beothuks of Newfoundland used to make pudding from their eggs.

But in those ages, humans didn’t pose a serious threat to the Great Auk’s existence. That threat emerged much later.

Like many sea birds, Great Auks roosted mostly in the water — but during the breeding season, they inhabited a few select islands in the Atlantic, ranging from Newfoundland in the west to Norway in the east.

They showed a preference for Funk Island, off the coast of Newfoundland, and Geirfuglasker and Eldey islands, off the coast of Iceland, as well as St. Kilda and Stac an Armin off the coast of Scotland. These were all small, rocky, and inaccessible islands which kept them safe from predators and major danger. In fact, the auks were so unused to predators that they had few means of defense.

The Little Ice Age of the 16th to the 19th centuries posed some problems, reducing their numbers and territory by making it more accessible to polar bears. But the Great Auks were a robust and adaptable species, and they were hardly deterred by this natural event. Instead, they only started to falter when humans began exploring these areas.

The northern Atlantic was home to many skilled sailors, and when humans started exploring these sites, they never stopped. Flightless and fight-less, Great Auks found themselves vulnerable. Humans started killing more and more Great Auks, as explorer George Cartwright observed in 1785.

“A boat came in from Funk Island laden with birds, chiefly penguins [Great Auks],” wrote Cartwright. “But it has been customary of late years, for several crews of men to live all summer on that island, for the sole purpose of killing birds for the sake of their feathers, the destruction which they have made is incredible. If a stop is not soon put to that practice, the whole breed will be diminished to almost nothing.”

An 18th-century sailor wrote that Funk Island was so populated by Great Auks that “a man could not go ashore upon those islands without boots, for otherwise, they would spoil his legs, that they were entirely covered with those fowls, so close that a man could not put his foot between them.”

By all accounts, there must have been hundreds of thousands of birds — but there could have never been enough to escape mankind’s ever-growing greed. For sailors embarking on long and often perilous journeys, it seemed like a boon from heaven. Captain Richard Whitbourne’s writings noted that sailors harvested the auks by hundreds at a time — “as if God had made the innocency of so poor a creature to become such an admirable instrument for the sustenation of Man.”

God had not made the poor creature as an instrument for man. The number of birds was dwindling, and the last nail in the coffin of the Great Auks was the feather industry.

Great Auks were not only hunted for their meat. Their fat and eggs were also sought after, but their feathers were what drew the eye of what was, in the early 19th century, a thriving industry.

The Great Auk’s down feathers — the layer of fine feathers found under the tougher exterior feathers — were highly sought after. They were a good thermal insulator, lightweight and packable. The down industry had already overhunted several species and turned its eyes on the Great Auk nesting grounds on Funk Island. The birds weren’t even hunted — they were harvested, that’s what sailors called it — every spring until 1810, when every last bird on the island was killed. What was once a thriving colony became nothing more than a Great Auk cemetery.

The systematic slaughter of birds was also riddled with cruelty as Aaron Thomas of HMS Boston described in 1794 — the birds were so docile that sailors burned them alive for fuel:

“If you come for their Feathers you do not give yourself the trouble of killing them, but lay hold of one and pluck the best of the Feathers. You then turn the poor Penguin adrift, with his skin half naked and torn off, to perish at his leasure. This is not a very humane method but it is the common practize. While you abide on this island you are in the constant practize of horrid cruelties for you not only skin them Alive, but you burn them Alive also to cook their Bodies with. You take a kettle with you into which you put a Penguin or two, you kindle a fire under it, and this fire is absolutely made of the unfortunate Penguins themselves. Their bodies being oily soon produce a Flame; there is no wood on the island.”

The dwindling auk numbers did not go unnoticed. Some efforts were made to protect the bird’s future, and in 1775 the Nova Scotian government asked the parliament of Great Britain to ban the killing of auks. The petition was granted, although enforcement was uncertain at best. Technically, anyone caught killing the auks for feathers or taking their eggs was beaten in public. In practice, the harvest continued.

The last colony of great auks lived on Geirfuglasker (the “Great Auk Rock”) off Iceland. The islet was little more than a volcanic rock, completely inaccessible to humans due to the dangerous underwater rocks that surrounded it. It seemed that at least here, Great Auks would be safe. But a final stroke of bad luck also took that away from them: a volcanic eruption submerged the islet, and the remaining birds were forced to relocate to the nearby island of Eldey.

Unfortunately, unlike Geirfuglasker, Eldey was accessible.

A total of fifty birds were present on Eldey when it was first discovered in 1835. Scientists of the time were very aware that the bird was close to extinction. Efforts were made to preserve what was left of this once-thriving species, but these efforts also backfired. The remaining birds became very valuable for collectors. Museums were also desperate to acquire the skins of the great auk for preservation and display, and they quickly began collecting birds from the colony.

The last pair of Great Auks was found by two sailors incubating an egg. As one of them strangled the birds to deliver their bodies to a merchant who wanted samples, the other smashed the egg under his boots — a fitting end for a species crushed under the boots of mankind. Great Auk specialist John Wolley interviewed the two men and one of the sailors concludes thusly:

“The bird that Jón got went into a corner but [mine] was going to the edge of the cliff. It walked like a man … but moved its feet quickly. [I] caught it close to the edge – a precipice many fathoms deep. Its wings lay close to the sides – not hanging out. I took him by the neck and he flapped his wings. He made no cry. I strangled him.”

A later claim of an individual sighted in 1852 in Newfoundland has been accepted by the International Union for Conservation of Nature and Natural Resources (IUCN), but it made no difference. The species had been wiped off.

Today, 78 skins of the great auk remain, mostly in museum collections. The peer-reviewed academic journal of the American Ornithologists Union is named The Auk — as an honor to the bird, but also as a reminder of misguided scientific efforts. But the real reminder is how carelessly we can drive a species into extinction. Like the passenger pigeon and the dodo, the Great Auk was killed to extinction without much concern. It had something we wanted, and we took it — it’s as simple as that.

While the circumstances may have changed, we can find this story in every episode of modern history. No matter where we look, mankind has developed and grown first and asked environmental questions later. It’s been almost two centuries since the Great Auks went extinct, yet we’d find it hard to say that our attitude towards defenseless creatures has truly changed.

The remains of the last two great auks, the ones killed on Eldey island by the two sailors, lies at the Royal Belgian Institute of Natural Sciences in Brussels — a stark reminder.