Ah, now we’re getting somewhere! We’ve discussed the date of Christmas and how it is (or rather isn’t) connected to the birth of Jesus, and when we talked about the origins of some of the most popular traditions connected to Christmas. But Christmas wouldn’t be Christmas without Santa Claus, this bearded jolly dwarf usually represented in green, blue or purple clothing. Nope, I’m not crazy – Santa Claus became the big red man we know and love today thanks to a company called Coca-Cola – but we’ll get on that just a little bit later.

Santa Claus, also known as Saint Nicholas, Father Christmas, Kris Kringle and simply “Santa”, is a figure with legendary, mythical, historical and folkloric origins who, in many western cultures, is said to bring gifts to the homes of the good children on the night before Christmas, December 24. However, way before he was Santa Claus, he was Saint Nicholas.

Nicholas was born in Parara, Turkey in 270 CE and later became Bishop of Myra. He played a crucial role in early Christianity and was, by virtually all accounts, a very kindhearted man. Nicholas was famous for his generous gifts to the poor, in particular presenting the three impoverished daughters of a pious Christian with dowries so that they would not have to become prostitutes.

Things took a strange turn in 1087, when a group of sailors who idolized Nicholas moved his bones from Turkey to a sanctuary in Bari, Italy. Not long after that, the cult spread further North, until it was adopted by German and Celtic pagans. These groups worshiped a pantheon led by Woden (Odin) –their chief god and the father of Thor, Baldur, and Tiw. Odin was usually wearing blue clothing.

Prior to Christianity, the Germanic people celebrated midwinter event called Yule. During this period, supernatural and ghostly occurrences were said to increase in frequency, such as the Wild Hunt, a ghostly procession through the sky thought to be led by Odin himself. However, something that had happened many times before happened once again: Christianity absorbed this tradition and made it its own. When this happened, the date of 25 December came in and took the traditional 6 December. Saint Nicholas left gifts in the socks or shoes, but Santa Claus would ultimately just leave them under the Christmas Tree – which wouldn’t become a custom for many centuries later though.

The appearance also changed from very strong and warrior like (Odin) to more jolly, bearded, and pleasant looking (Odin had just one eye, trading the other for a drink from the Well of Wisdom). 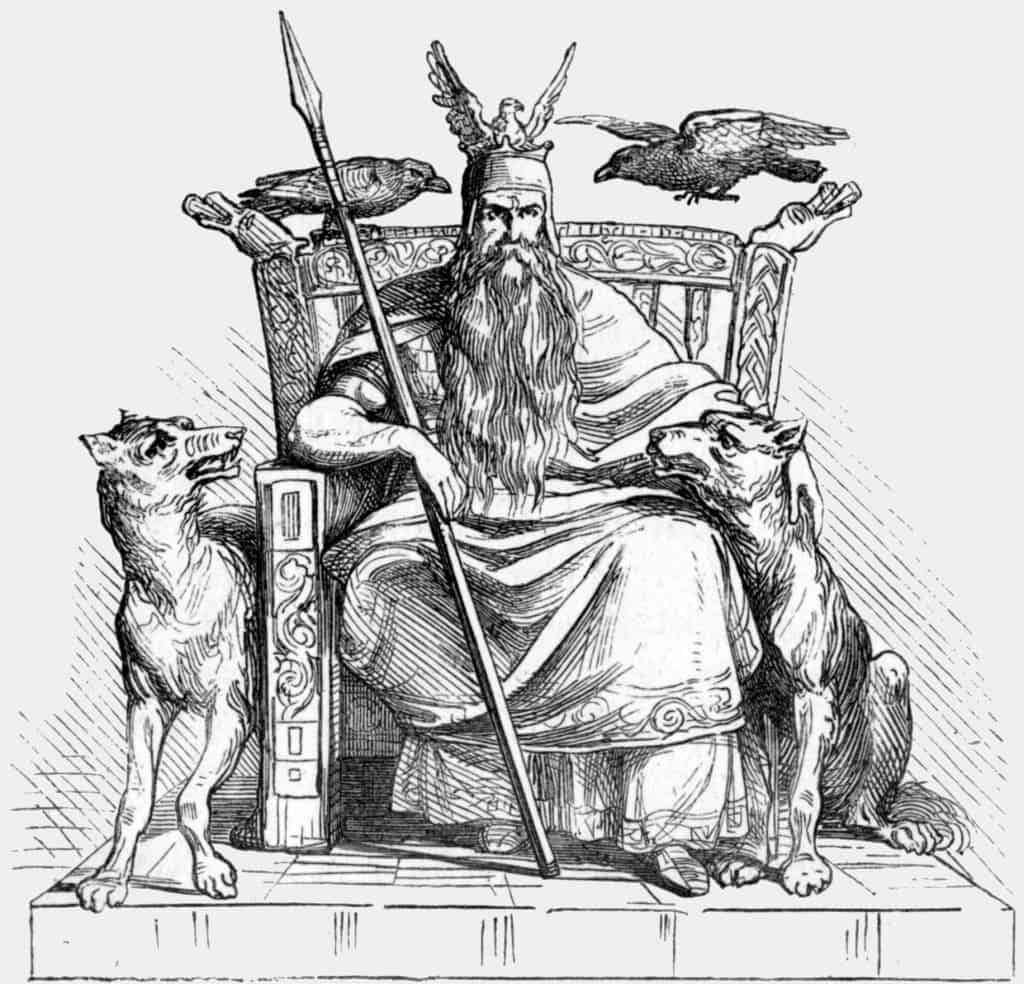 In the Netherlands, Belgium and Luxembourg, Saint Nicholas (“Sinterklaas”, often called “De Goede Sint”—”The Good Saint”) was an elderly, serious man with white hair and a long, full beard. He wears a long red cape or chasuble over a traditional white bishop’s alb and red clothes. This was however, the only area in which he was red.

Meanwhile, in England, they were celebrating Father Christmas since the 16th century – the spirit of good cheer at Christmas, bringing peace, joy, good food and wine and revelry. In Scandinavia, a being in Nordic folklore called “Tomte” or “Nisse” started to deliver the Christmas presents. He was wearing grey clothes. In Eastern Europe, they mostly celebrated Saint Nicholas bringing gifts on the 6th of December (something still celebrated today in many countries, often in addition to Christmas). Other related figures in folklore include Mikulás (Hungary), the Yule Goat (Scandinavia), Olentzero (a Basque character), Befana (Italy), and many ore.

In the beginning of the 19th century, the world still hadn’t developed a unified idea of Santa Claus. In the mid 1800s, literature started playing a huge role in promoting ideas about Santa Claus. The book A New-year’s present, to the little ones from five to twelve was published in New York. It contained Old Santeclaus, an anonymous poem describing an old man on a reindeer sleigh, bringing presents to children. The book was immensely popular for the time, and the ideas presented in it spread like wildfire. But most ideas about the modern Santa Claus came from an anonymous publication of the poem “A Visit From St. Nicholas” (better known today as “The Night Before Christmas”) in the Troy, New York, Sentinel on December 23, 1823. 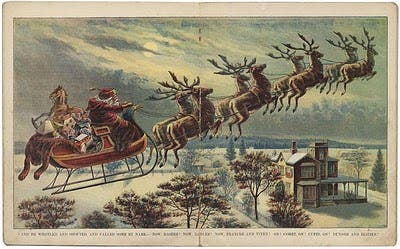 The poem was later attributed to Clement Clarke Moore. The main ideas that were presented in the poem are: He (Saint Nick) rides a sleigh that lands on the roof, entering through the chimney, and has a bag full of toys. St. Nick is described as being “chubby and plump, a right jolly old elf” with “a little round belly”, that “shook when he laughed like a bowlful of jelly”, in spite of which the “miniature sleigh” and “tiny reindeer” still indicate that he is physically diminutive. The reindeer were also given names: Dasher, Dancer, Prancer, Vixen, Comet, Cupid, Dunder and Blixem (Dunder and Blixem came from the old Dutch words for thunder and lightning, which were later changed to the more German sounding Donner and Blitzen).

The Modern Santa Claus and Coca-Cola

Haddon Hubbard “Sunny” Sundblom was an American Artist, most known for changing the face of Santa Claus, but also for making a cover illustration on the Playboy magazine, advertising Coca-Cola next to an almost naked, drawn, female character.

Images of Santa Claus were further popularized through Haddon Sundblom’s depiction of him for The Coca-Cola Company’s Christmas advertising in the 1930s. The campaign was so incredibly successful that many people actually thought that Coca-Cola had invented Santa Claus – which, in a way, was not that far from the truth. He stripped him of his small stature and green/blue/purple clothes and instead, made him a big, lovable, bearded man, dressing him in the company’s red and white colors. This is the Santa Claus almost all of us know today.

By the end of the 20th century, the merger of Saint Nicholas, Odin, and numerous cults and traditions from the entire Europe, developed by 19th century literature and ultimately shaped by an advertising campaign resulted in the jolly man we see today.