Is the universe infinite?

Wrap your mind around this...

The observable universe is some 93 billion light-years across. The whole universe is almost certainly much larger than that. But we still don’t know whether or not it’s infinite. 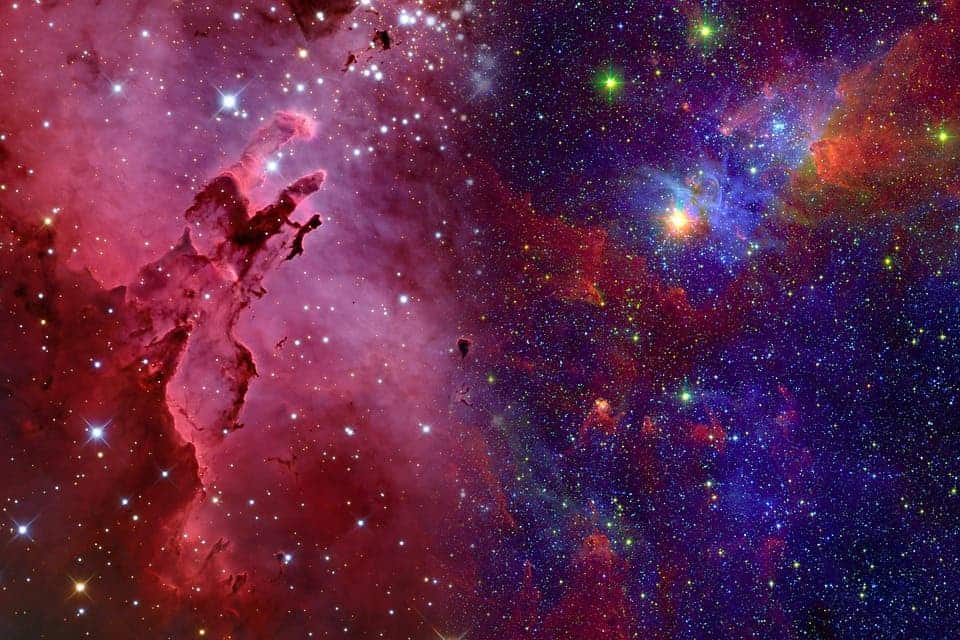 It takes some mental gymnastics to wrap your head around how big the universe is — and we’re not even sure of its actual size is (we’ll get to that a bit later). Think of it this way: in a single second, light travels around 300,000 kilometers (186,000 miles). The distance that light traveling at this speed travels in a year is called a light-year. The observable universe is 93 billion light-years across. What lies beyond that, we don’t know — we can’t observe it in any possible way and we’re not really sure. So we suspect that there’s still a lot of universe beyond that, though we’re not sure how much.

Although astronomers have frantically looked for an answer, we also don’t know if the universe is infinite or not — and to make matters even more complicated, “infinite” might also mean more than one thing.

Let’s see what we know so far, what the plausible possibilities are, and what we can guess off of that.

For starters, the fact that we know the observable universe to be 93 billion light-years across is astonishing — that’s a great story in itself, and you can read about it extensively here — but how do we know it? Well, the story starts out with an Austrian mathematician and physicist called Christian Doppler.

In the 19th century, Doppler tried to explain an unusual phenomenon about electromagnetic waves: if and observer moves towards or away from the source of a wave, the length of that wave decreases or increases respectively. This is now called the Doppler effect and was confirmed for essentially all types of waves.

For astronomers, this is extremely important. If you have some stars you can use as a reference (a sort of cosmic “candle“), you can look for all sorts of anomalies in the wavelengths you’re seeing. If you’re seeing increased wavelengths, the object is moving away from you (redshift), and if the wavelengths are getting smaller, it’s moving towards you (blueshift). 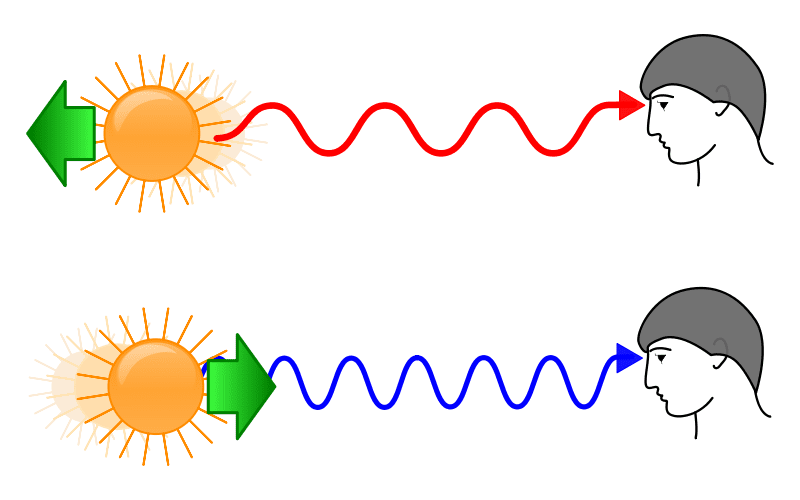 In the 1920s, Edwin Hubble discovered something unusual. Sure, some things are moving towards each other and others are moving away, but in a general sense, everything seems to be moving away from everything else. Simply put, the universe appears to be expanding. This was truly a groundbreaking moment — a paradigm shift from the universe which was once thought to be fixed and stable. Not only that, but this universal expansion also appears to be accelerating. We still don’t know exactly why or how this happens, but subsequent measurements have confirmed and refined this idea.

Studying redshift is fundamental for studying cosmic distances, especially for things which lie far away. But this is where things start to get a bit tricky.

If you’re looking at something that’s, say, 1 light year away, you see it the way it was 1 year ago. But in that year, the universe has expanded, so the distance between you and that object is now greater than 1 light year.

Astronomical observations have found the age of the universe to be around 13.7 billion years, and one of the farthest objects we’ve ever discovered is a galaxy called GN-z11. This galaxy is 13.4 billion years old, which is incredibly old. However, although it took light from it 13.4 billion to reach us, the galaxy lies way farther than 13.4 billion light-years away — in fact, astronomers believe it to be a whopping 32 billion light-years from Earth! So it’s misleading to think that the age of the universe (in years) also represents its size (in light years). But we can go even farther than that.

We can detect some photons which were formed before any other star or galaxy. These earliest photons come from the so-called cosmic microwave background (CMBR), faint cosmic background radiation filling all space. This is the earliest known electromagnetic radiation — and as far as we can tell, it’s the oldest thing we can detect.

Wrap your head around this

The blunt answer is… we don’t really know. We can’t observe anything outside of the observable universe (doh!), so we can’t really know for sure — but that doesn’t mean we can’t make assumptions.

There are different studies attempting to calculate the real size of the universe. For instance, one statistical estimate carried out by Oxford researchers found that the universe might be 251 times larger than the observable universe, which would put it at 23,343 light-years across. Even so, that’s on the conservative side — one study reports that the universe is

megaparsecs across, with one megaparsec being 3.26 million light years. That’s a number so big that the unit of measure doesn’t even count. Whether you express it in meters or light-years or megaparsecs, the different just gets lost in the final digits.

If the universe were to be this big, then even if it’s not technically infinite, it could still be practically infinite — nothing from our location could reach its edge or vice versa. But it gets even weirder!

Remember, we live in an expanding universe — we know that from Hubble. But Hubble was off on his initial measurements: recent studies have converged on an expansion rate around 70/km/megaparsec. So if something is one megaparsec away, it’s moving away at a rate of 70 km/s. If it’s 2 megaparsecs, it’s receding at 140 km/s, at 3 megaparsecs it’s 210 km/s, and so on.

Let’s do a gross simplification: the observable universe is 93 billion light-years across — that’s 28.500 megaparsecs. This would mean that the points which are farthest away are receding at a speed of about 2,000,000 km/s — that’s almost 10 times higher than the speed of light! But the theory of special relativity tells us nothing can move faster than the speed of light, so what gives?

Well, technically, the universe isn’t moving. It’s not like something is moving at 2 million km/s — space itself is expanding at that rate. General relativity does a better job of dealing with this type of conundrum, but even general relativity is, in a sense, a local law — with “local” being limited to our universe. We have no idea what’s going on “outside” the universe, if such an outside exists, or if it even makes sense.

Furthermore, notice that the expansion rate isn’t a speed: it’s a speed per distance. So while cosmic objects are getting farther away from one another, they aren’t moving away from one another. But if you were to try to reach these far away places, you’d have to travel faster than the speed of light, which is impossible (according to our knowledge). You can even calculate that objects farther than 4,740 megaparsecs are moving away at a rate higher than the speed of light and could therefore never reach one another. Galaxies closer than that are still emitting light that can reach us. Of course, this all relies on the assumption that the universe will continue to expand, which may or may not be true. The universe could stop expanding and start collapsing onto itself for all we know, or it could expand faster and faster forever.

So even if the universe is not theoretically infinite, from a practical point — it quite likely is. But that still doesn’t really answer the question, does it?

To infinity… and beyond! 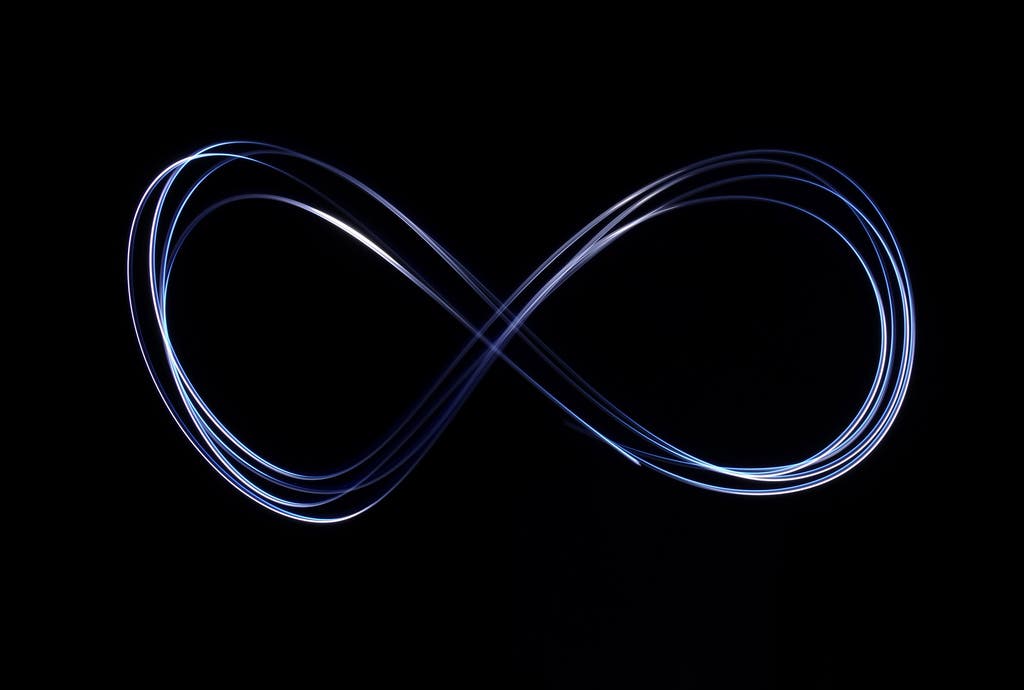 The universe may be infinite, but we can only analyze a finite part of it (the part in which light has had time to reach us). As far as we can see, there are galaxies in every direction with no sign of slowing down. Simply put, we’ve seen no sign of an edge of the universe.

Olber’s paradox says that if the universe extends infinitely, then no matter where you look, you would eventually fall on the direction of a star, so the night sky would completely light up. Since this doesn’t happen, then the universe can’t be infinite. However, Olber’s paradox might be explained by the fact that some objects are simply too far away for their light to reach us, or there is just too much dust in the universe obscuring our view. It could also be that stars aren’t distributed on random directions, but rather take on a fractal distribution — so Olber’s paradox doesn’t ultimately do all that much in the way of disproving an infinite universe.

Another argument attempting to debunk an infinite universe is that during the Big Bang, the universe was condensed into an infinitesimal point, so how can something infinite derive from something finite?

This, however, relies on an incorrect assumption: the Big Bang wasn’t an eruption in space, it was an eruption of space. Before it, space did not exist, so something could not be big or small. It was a point of infinite energy, which again, doesn’t do much to clear up whether the universe can be infinite or not.

Here’s another intriguing question: if the universe really is infinite, does that mean there’s an infinite number of you’s out there? Are there different variations of you, like one in which you have cat ears, and another one in which you’re immortal? That may very well happen, surprisingly enough — but it’s not that simple.

The odds of someone exactly like you are infinitesimal — from a cosmic standpoint, the odds are so small that they’re essentially 0. If the universe is infinite, then the odds of a new you are basically infinity times zero — a type of problem which has haunted mathematicians for centuries.

For the less math-savvy out there, this is a type of indeterminate problem: on one hand, the answer should be 0, because everything multiplied by zero is zero. But on the other hand, the answer should be infinity, because everything multiplied by infinity is infinity. The answer relies on how “zero” that zero really is, and how “infinite” that infinity really is. In our practical case, we don’t know how infinitesimal the odds of evolving a specific life form are, so the problem remains indeterminate. You could be the only you out there, or there could be an infinite number of variations — it’s also possible that there’s a finite number of you’s out there, which makes it even weirder.

You’ve probably realized that there’s a lot of if‘s, maybe‘s, and we don’t know‘s in this conversation. That’s just the way things are right now — we’re still only starting to scratch the surface of cosmic truths.

There’s no clear-cut answer to whether the universe is infinite or not, but in this case, the reward is in the journey, not the destination.

The one thing we do know is that the universe is big. It’s a big and mysterious place, equally wondrous and terrifying. The fact that we, the results of stardust and physical forces, are trying to understand its nature is equally wondrous — and equally terrifying.