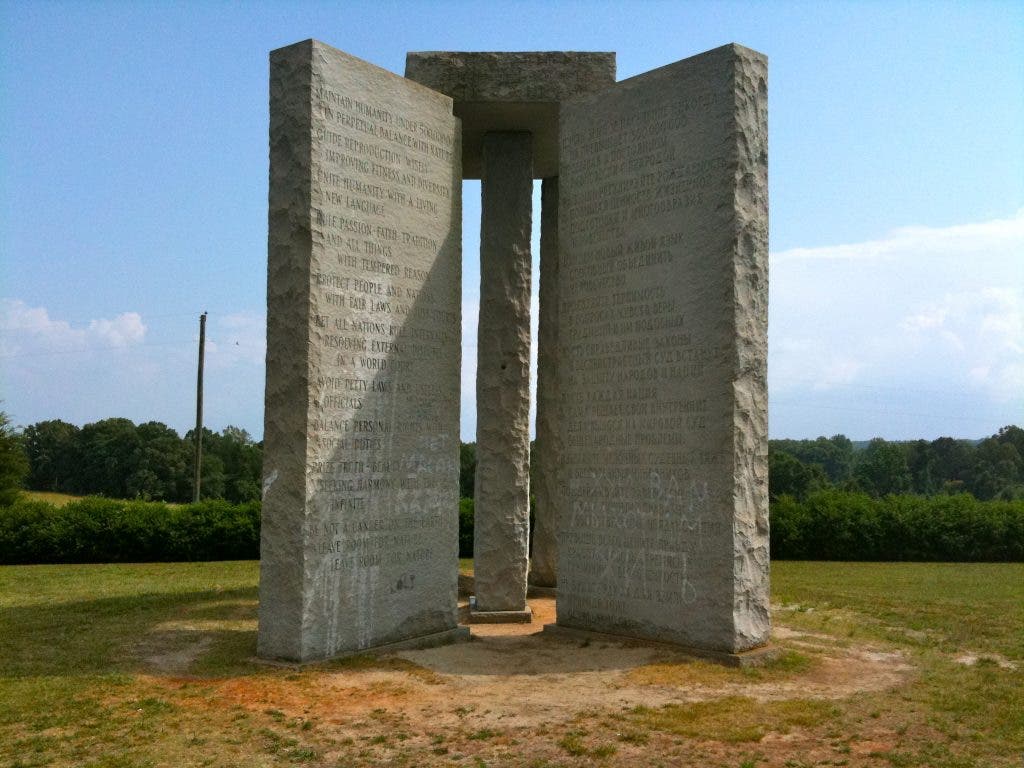 On a barren field in Georgia, US, five granite slabs rise in a star pattern. Each of them weighs over 20 tons and on top of them, there is a capstone. Nobody knows who built it or why they were placed there, but one popular opinion that their purpose is to guide humanity after a predicted post-apocalyptic event that will come in the not so distant future. The huge blocks send a message out to the world in eight different current languages, as well as four extinct ones (ancient Greek and Egyptian hieroglyphs for example). The set of ten guidelines has baffled people around the world, with descriptions ranging from perfect and utopian to satanic or quirky. But no matter what the case, these ten commandments should definitely get you thinking:

Maintain humanity under 500,000,000 in perpetual balance with nature.

Rule passion – faith – tradition – and all things with tempered reason.

Protect people and nations with fair laws and just courts.

While some of them are clearly noble and laudable (like having fair laws and avoiding petty ones), some of them have stirred controversy — especially “Maintain humanity under 500,000,000 in perpetual balance with nature”, and “Guide reproduction wisely – improving fitness and diversity”. If we were to apply these now, we’d have to kill over 90% of the planet.

However, this is a perfect example of a misinterpretation, because it has to be kept in mind that these “commandments” have to be applied after the alleged apocalyptic event. It’s not clear why “they” settled on 500 million, but the bottom line is that even though we hate to admit it — the world is overpopulated right now; it’s way overpopulated. We are indeed finding better and better ways to manage our resources and use sustainable or renewable forces, but in just the last 50 years, the population of the Earth has more than doubled, and if we keep this up, the prognosis is pretty dire indeed. But back to our Georgia Stones.

The construction of a post-apocalyptic monument

Whoever built them definitely knew what they were doing: the slabs stand proud and sturdy and will endure through the centuries with minimal damage. They also have a remarkable set of other features. For example, they feature a built-in channel that indicates the celestial pole, a horizontal slot that shows the annual travel of the sun as well as a system that marks noontime throughout the year. But why they have these features and lack others that would apparently be more useful for dazed survivors is still a mystery.

It all started on a Friday in June 1979. An elegantly dressed gray-haired man showed up in Elbert County and introduced himself as R. C. Christian — a reference to Christian Rosenkreuz — or Christian Rose Cross in English, and said he represents a small group of loyal Americans. Rosenkreuz is a legendary character that founded the Order of the Rose Cross. He quickly became one of the most important and mysterious figures of the time, by blending Christianity with some teachings of Arab and Persian sages. R. C. Christian admitted this is not his real name, but refused to reveal anything about his identity. Joe Fendley, president of the company that specializes in granite construction, didn’t care too much about this — that is, until he found out what monument R. C. Christian had in mind.

He explained that it would be a compass, calendar, and clock and also be engraved with a set of “guides” written in 8 of the world’s languages. Fendley believed he was dealing with a crazy man and wanted to get rid of him, so he explained that a large number of tools and machines would be required, but Christian just nodded. He then quoted a price several times greater than the real one, but again, Christian seemed indifferent, so Fendley sent him to Wyatt Martin, president of the Granite City Bank. Martin is probably one of the people who have seen and spoken to the mystery man the most.

Ten guides, a clock, a calendar, and a compass

The astrological specifications were incredibly complex, so the construction company had to employ the help of an astronomer from the University of Georgia. The complex indicates the day of the year, equinoxes, and solstices among others. But the main feature is the 10 guides engraved in the several languages.

The mission statement raises the first few questions marks: let these be Guidestones to an age of reason. But controversy started even before the monument was finished — many claiming it to be the devil’s work. By 1980, when they started building the monument, Martin remembers that people started telling him to stop and accused him of being part of an occult movement.

The main problem is that the commandments engraved on the stones are quite eccentric, to say the least. It didn’t take a lot to compare the first two commandments to the practices of Nazis, among others, but again, this doesn’t mean that a large part of mankind has to disappear – the guides apply in a post-apocalyptic event, where the population is undoubtedly very small; this can be very hard to digest, but seeing things from their point of view is quite interesting, and any comparison with the Nazis or far right ideology is unreasonable. I mean, if a horrendous tragedy happens, and somehow the world population is reduced to just a few hundred million then yes, it would be a good idea to have some care regarding the number of humans.

Guide number 3 instructed people to use a common language — which would, of course, greatly reduce numerous difficulties throughout today’s world; achieving such a task is, however, impossible at the moment due to evident practical reasons. This is the part that bothered annoyed the Christians, who quoted the bible saying that a common tongue is the mark of the Antichrist — yeah, makes a lot of sense for me, too. Same thing with RULE PASSION—FAITH—TRADITION—AND ALL THINGS WITH TEMPERED REASON — for some, faith has to be the alpha and omega with nothing else in between. For others, yours truly included, finding a sustainable balance is a much nobler goal.

The structure, sometimes referred to as an “American Stonehenge”, sure stirred a lot of controversies, but it got us thinking — which means that at least a part of its objective was achieved. Even ignoring the more controversial commandments, the final 6 should definitely be worth achieving. After all, what’s wrong with avoiding unnecessary officials and prizing truth?