by Mihai Andrei
in Green Living
Reading Time: 2 mins read
A A
Share on FacebookShare on TwitterSubmit to Reddit

The National Climatic Data Center have released their monthly report for November 2012, which means we have an almost perfect picture of the temperatures in 2012, and the situation is pretty bleak: 2012 will almost certainly be, with a comfortable margin, the warmest year on record in the US.

November itself wasn’t extremely warm, being the 20th warmest November on record, but here’s the kicker: even if December brings much cooler temperatures than average, it would still make 2012 rank as the warmest year ever recorded in the contiguous United States! It will most likely beat the record holder by approximately 1 degree Fahrenheit. 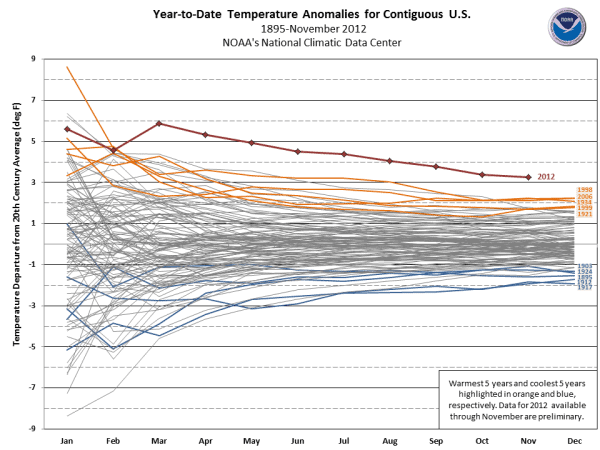 So, bottom line, 2012 will go down as the warmest year ever recorded in the contiguous United States since record keeping began in 1895. Warm winter, warm summer, warm autumn and spring – warm all the way. Prior to this year, 1998 was the warmest year ever recorded, and it is yet another indicator of how extreme the weather has got in the United States, arguably the biggest contributor to man-made global warming.