Why Chinese men are the most single in the world: the perils of gender imbalance in China

Possibly the greatest demographic challenge China is facing has due to do with a hugely discrepant gender imbalance. On average, 118 boys are born for every 100 girls compared to the world average of 103 to 107, respectively. The effects of the imbalance are already felt by an aging population and in time, it could seriously affect Chinese society for the worse.

At almost 1.4 billion people (officially), China is by far the world’s most populated country, but as you might imagine, managing this many people can be a tremendous headache. Despite its accelerated growth in the past couple of decades, China’s people are getting older and year after year the number of working people is decreasing. Now, China’s greatest demographic challenge is a hugely discrepant gender imbalance. On average, 118 boys are born for every 100 girls in China, compared to the world average of 103 to 107, respectively. The effects of the imbalance are already felt by an aging population and, in time, it could seriously impair Chinese society.

Talk about segregation of sexes

Elsewhere in the world, nature is usually allowed to run its course. Sure, birth control, abortion, and contraceptives are common topics in the developed world and almost everybody in the developed world uses at least one of them, but China is a different beast altogether. You might have heard about the country’s One-Child Policy. Following World War II, China experienced a wildly dramatic increase in population. By 1978 the issue was out of control, so the government implemented one of history’s cruelest social policies. Couples were suddenly forced not to birth more than one child. What happened if they had a second one, you ask? The baby had to be disposed of by any means necessary.

Traditionally, Chinese culture puts great value on boys, while girls are shunned. Pairing this with the One-Child Policy meant that a couple only had one chance to have a boy. Because of a cultural norm that places a premium on boys, the policy’s victims frequently included first-conceived children that happened to be girls.

For over three decades, China’s One-Child Policy condemned approximately 37 million Chinese girls – deemed unwanted or “surplus” – to abortion, infanticide, abandonment and human trafficking. This is besides the estimated 400,000,000 abortions (boys or girls) which were made since the criminal policy was enacted. But not all Chinese parents are monsters. When a second or even third child was made, some found ways to keep them hidden — but their lives weren’t easy. 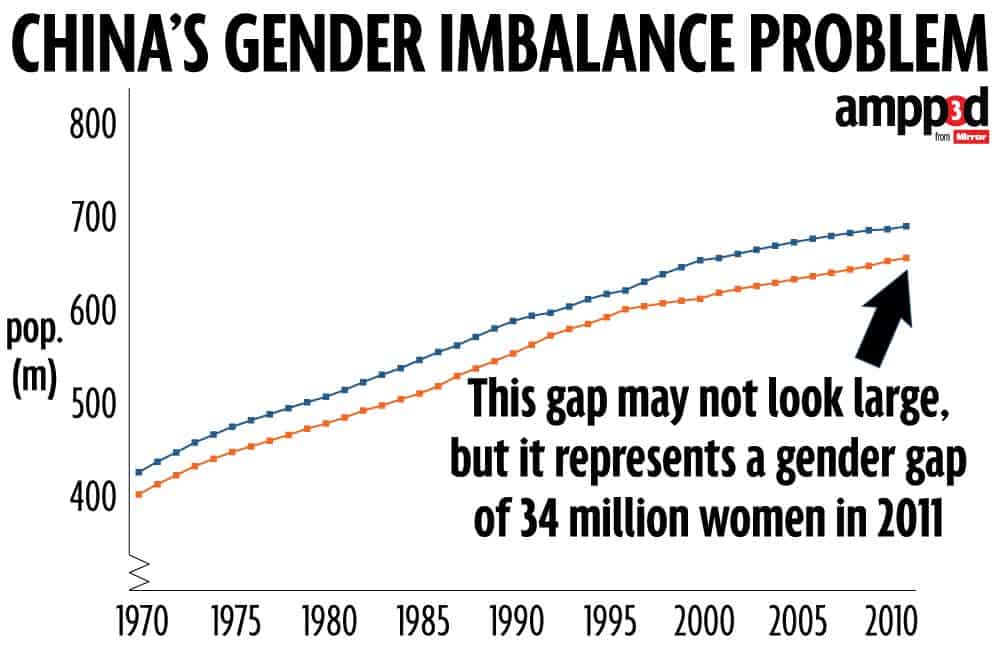 According to UNICEF, an estimated 290 million children under the age of 5 do not possess a birth certificate. As we know, proof of birth determines a child’s citizenship, nationality, place of birth, parentage and age, which are critical to ensuring children remain a part of society and do not fall victim to exploitation and other dangers. About 13 million Chinese adults lack household registration certificates because they were born in violation of the One-Child Policy. Family members caught violating the rule face heavy fines and even imprisonment for the men or sterilization for the women. Not having this certificate means they can’t go to school, get a job, get married or do something as simple as check out library books. In the eyes of the state, these people don’t exist.

With just these few things in mind, it’s no wonder that China is in massive trouble right now. The One-Child Policy may have put China off a treacherous path, but coupled with the country’s bias for males, it has also lead to another major and important destabilizing factor.

“Our country has the most serious gender imbalance that is most prolonged and affecting the most number of people,” the National Health and Family Planning Commission said in a statement on its website.

The agency is taking extra steps to monitor the situation, like increasing supervision on fetal sex determination, which is banned in China. Even so, families often send samples to black market labs in other countries. In their eyes, the risk is worth it considering the alternative is raising a daughter for 18 years. In some parts of China, the ratio can be as high as 130 boys to 100 girls. I don’t believe the Chinese Government had any of this in mind when they decided to address their overpopulation problem, but the results speak for themselves.

All in all, this means that there are tens of millions of sexually deprived men, and there may be as many as hundreds of millions only a couple of years from now, who are now suddenly having a hard time finding a spouse. We already know China’s population has stabilized and is expected to steadily fall by 2030, but the latest news seems to indicate this might happen much faster. Although China relaxed its One-Child Policy at the beginning of the last year — allowing couples to have two children if either parent is an only child — this is unlikely to greatly improve the gender imbalance in China. Analysts say China faces the prospect of becoming the first country in the world to get old before it gets rich. By 2050, more than a quarter of the population will be over 65.

So what happens next? In his book, “The Demographic Future”, Nicholas Eberstadt describes how the world of 2030 will look like from a demographic standpoint. His findings, based on numerous papers and models, suggest for China a doubling of the number of senior citizens, a shrinking of the younger working class, and rudimentary social welfare and pension systems incapable of coping with the massive imbalance. This isn’t entirely surprising — this is a fate shared or to be shared by all the developed countries of the world. But what the rest of the world doesn’t share with China is its lack of consideration for women. By all accounts, the Chinese people will come to regret it — the men, at least.

“It is already possible to draw a reasonably reliable profile of the world’s population in 2030. This is, of course, because the overwhelming majority of those who will inhabit the world 20 years from now are already alive. As a result, one can make some fairly confident estimates of important demographic trends, including manpower availability, the growth in the number of senior citizens, and the resulting support burden on workers,” Eberstadt writes.

“…China will face a growing number of young men who will never marry due to the country’s one-child policy, which has resulted in a reported birth ratio of almost 120 boys for every 100 girls…By 2030, projections suggest that more than 25% of Chinese men in their late 30s will never have married. The coming marriage squeeze will likely be even more acute in the Chinese countryside, since the poor, uneducated and rural population will be more likely to lose out in the competition for brides.”

Did you catch that? One in four Chinese men will never get married … to a woman. Seriously, if homosexuality is, in fact, influenced the most by social factors, then we should expect a surge in homosexual behavior in the country. China is very clear on how it views the LGBT community, so it should be extremely interesting to see how things develop in the near future.