by Tibi Puiu
in Other, Science 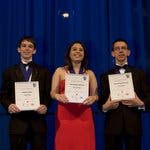 Evan Michael O’Dorney, only aged 17, a gifted math whiz-kid was awarded by $100,000 from the Intel Foundation for placing 1st at the Intel hosted Science Talent Search, for a project in which he compared two ways to estimate the square root of an integer, discovering which one was the quickest. His research could provide very useful in data encryption. O’Dorney is no stranger to awards, since last year he topped out nine other prodigious math kids to take the top prize at the American Mathematical Society’s “Who Wants to Be a Mathematician?” contest, while in 2007, he won the Scripps National Spelling Bee.

Seventeen-year-old Michelle Hackman from Great Neck, N.Y. took the second place prize of $75,000 for conducting a study on the effects of separating teens from their cell phones. What’s quite remarkable in the case of Michelle is that she’s blind, and that in the process of conducting her psychological research she trained 10 people to gather results.

The $50,000 third place prize went to Matthew Miller, 18, from Elon, N.C., who studied the way the strategic placement of bumps on wind turbines alters its aerodynamics and helps generate electricity more efficiently. The three were among the 40 finalists flown to Washington DC for the contest, selected from 300 semifinalists,  chosen out of 1,744 high school senior entrants in total.  Overall $630,000 were awarded to the 40 Intel STS finalists.