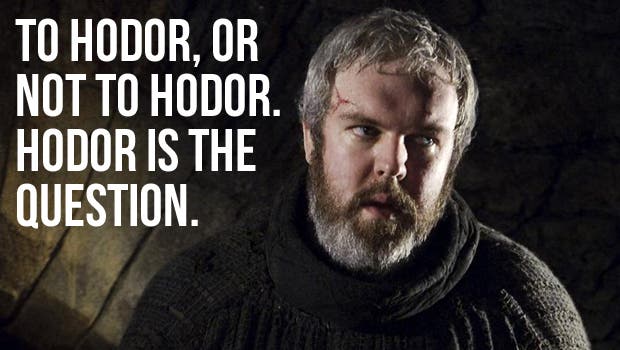 Now, that’s a memorable quote! Jokes aside, it’s characters like Hodor – an eight foot  simpleminded servant of House Stark at Winterfell working in the stables – that make George R. Martin shine as a great writer. So much depth and such a lovable character, and yet he can’t utter a single word besides “Hodor”. But some of you might be surprised that there are many real life Hodors out there, though a one-word vocabulary is indeed quite rare.

These people are plagued by a neurological condition called expressive aphasia, which makes it difficult to speak, understand speech, and read and write. The first account of aphasia dates back to the XIXth century when French physician Paul Broca came upon a most peculiar case. His patient, named Louis-Victor Leborgne, looked like any other normal person and seemed to reason like one as well. Unfortunately, gradually but surely, the man lost the ability to produce meaningful speech. Like Hodor, he was nicknamed Tan by his peers since that was the only word he could utter: Tan, Tan, Tan.

After Leborgne died, Broca performed an autopsy and found the left frontal lobe had a lesion, adjacent to a brain fold called the lateral sulcus. In the following years, 12 brains belonging to patients of similar condition were examined by Broca and the doctor found consistent evidence of damage to the same area, known in medical literature today as “Broca’s area”. More than a hundred years since Broca made his first autopsy, a group of French scientists performed MRI scans of Leborgne’s brain. They found the lesion extended far deeper than Broca first described.

Generally, Broca’s area has been found to be involved in  language comprehension tasks,interpretation of movement, and comprehending various gestures also associated with speech, such as waving good-bye. Hodor, however, is an extreme case of aphasia. Generally, a person with aphasia will be able to convey some sense, despite doing so in a telegraphic manner. “How’s it going?” “Beer. Can. Buy”. Meaning, “I went to the market and bought a can of beer.”