The pamphlets are disturbing and nonscientific.

Aggressive anti-abortion campaigns in Texas are causing debates about human rights in the first place, but parts of the pamphlets distributed by authorities are simply inaccurate and non-scientific. 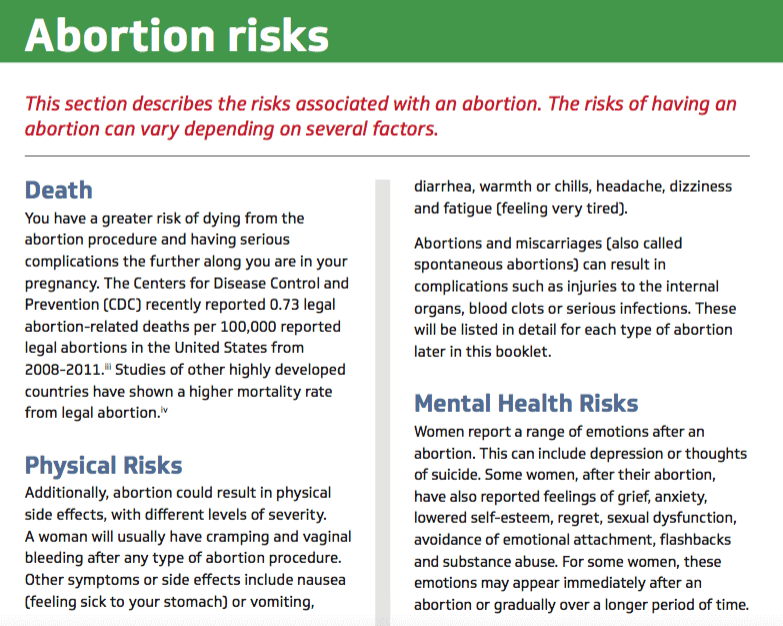 In 2003, an abortion law in Texas required the state to provide information about fetal development to women who wanted to terminate their pregnancy. The law requires that the information “be objective and nonjudgmental and be designed to convey only accurate scientific information about the unborn child at the various gestational ages.” Well, to put it bluntly, it’s not.

The latest version of the booklet suggests that women who give birth have a lower risk of cancer than women who have abortions. This claim is not only baseless but has been refuted by the American Cancer Society, the CDC, and the American College of Obstetricians and Gynecologists. In fact, this mention is likely the result of lobby by anti-abortion organizations, including the Association of American Physicians and Surgeons, a medical group with a long history of anti-science.

“Early studies of the relationship between prior induced abortion and breast cancer risk were methodologically flawed. More rigorous recent studies demonstrate no causal relationship between induced abortion and a subsequent increase in breast cancer risk,” the college’s Committee on Gynecologic Practice said after an extensive literature review in 2009.

The CDC also shares this position. The idea that there is a connection between abortion and breast cancer risk is outdated and simply flawed.

“Since then, better-designed studies have been conducted. These newer studies examined large numbers of women, collected data before breast cancer was found, and gathered medical history information from medical records rather than simply from self-reports, thereby generating more reliable findings. The newer studies consistently showed no association between induced and spontaneous abortions and breast cancer risk,” the CDC says.

But there are even more troubling aspects. The guides also argue that having an abortion increases a woman’s risks of infertility, death, or suicide, something that’s also not backed by science, and that a fetus can feel pain at 20 weeks’ gestation. Peer-reviewed medical studies say fetal pain is likely not felt until closer to 30 weeks into pregnancy.

So there are a number of issues with these booklets, but Texas and other states continue to distribute such pamphlets, with anti-abortion groups deceivingly calling this “a triumph over misinformation.” In a press release, Texas Right to Life, one of these groups, stated:

“Texas Right to Life thanks DSHS for resisting the ideologically motivated demands of the pro-abortion lobby. Prudently, health officials rejected multiple deceptive and malicious recommended changes to the booklet that would have undermined informed consent of Texas women,” the group says.