Shocking news: implanting a camera in your head is bad for your health 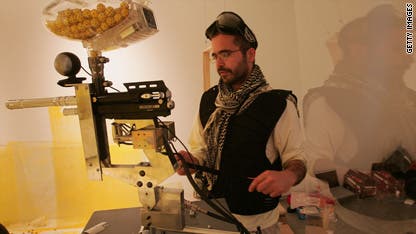 Artists suffer for their art – it’s a well known fact. But for an artist at the New York University, things escalated to a whole new level: the camera he installed himself in his head was rejected by his body, causing some serious health issues.

Let’s rewind a little; back in November, Wafaa Bilal, an NYU photography professor tried to do something nobody else had done before (and it’s easy to understand why). He went to a tattoo shop in Los Angeles and had a titanium base inserted behind the skin on his head. He attached a camera to it that took pictures every minute, pictures that were available for everybody to see on his website.

The first question that pops up of course, is why would somebody insert a camera in his head ? According to the Iraqi artist, it’s the best way of keeping a record of his past, which was necessary since he became a refugee in 1991. However, he does have another reason, which is more profound

“Most of the time, we don’t live in the places we live in,” he said. “We don’t exist in the city we exist in. Perhaps physically we exist, but mentally we are somewhere else.” Yet another explanation: The project points to the future—a future where, as Mr. Bilal sees it, communication devices will become part of our bodies.

But his innovative project reached a road block when his body started rejecting the camera; steroids and medication didn’t do him much good, so the camera had to be removed. He is determined to continue however, with a camera that’s tied to his head instead.