It was the most complex penis transplant ever performed.

by Alexandru Micu
in Biology, Health & Medicine, News
Reading Time: 3 mins read
A A
Share on FacebookShare on TwitterSubmit to Reddit

A young army veteran, left maimed by an improvised explosive device (IED), received a large section of tissue as a transplant last month. The unusual bit is that this tissue included the penis, scrotum, and a portion of the abdominal wall. This is the second successful and most complex penis transplant to be carried out in the US.

The 14 hour-long procedure took place at the Johns Hopkins Hospital in Baltimore, Maryland last month, according to The New York Times. This is the third ever successful penis transplant ever performed, the second successful one to be performed in the US, and the first complex penis transplant ever performed — it involved the scrotum and surrounding tissue as well as the penis.

The doctors expect nerve regrowth will take some time, but they’re hopeful the patient will eventually regain the ability to urinate, have spontaneous erections, and achieve orgasm. For ethical reasons, the surgeons removed the testicles prior to the procedure; else, the recipient could have fathered children that genetically belonged to the donor, who is deceased. 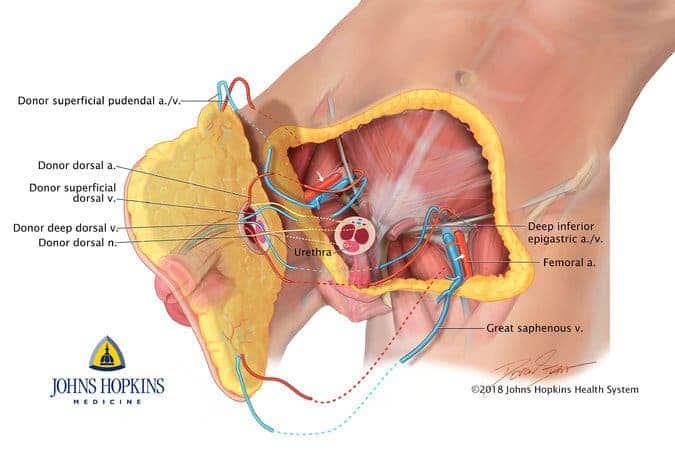 The IED took both his legs above the knee and destroyed his genitals. But, the latter injury hit him the hardest.

“I feel whole again,” said the patient for The New York Times. He asked to remain anonymous due to the stigma around genital injury.

“That injury, I felt like it banished me from a relationship,” he recounts. “Like, that’s it, you’re done, you’re by yourself for the rest of your life. I struggled with even viewing myself as a man for a long time.”

He now has plans to go to medical school, settle down, and meet someone. “Just that normal stuff,” he said.

Prior to his operation, the transplant procedure was still highly experimental and only involved the penis. The first successful transplant of its kind took place in 2014 in South Africa. In 2016, Johns Hopkins performed the first successful penis transplant in the U.S. for a Boston man who lost his penis to cancer. Over the years, doctors there have refined their knowledge, seeking to provide transplants for young veterans returning from the battlefield with devastating, life-changing injuries.

The doctors performed this transplant, which Lee estimated to cost $300,000 to $400,000, for free. In the future, they hope the DoD will cover the expenses for their veterans. Ars Technica reports that According to the Department of Defense, 1,367 men, nearly all under the age of 35, returned to the U.S. from Iraq and Afghanistan with genital injuries between 2001 and 2013. Of those, 31% had injuries to the penis, and 20% had severe injuries.