by Tibi Puiu
in Mind & Brain, Neurology, News
A A

A group of neuroscientists have achieved what some might believe strictly belongs to the realm of science fiction – they’ve successfully transmitted a message relayed by the brain of a person to another directly; no voice, no video, no sound, no text. The information was fed directly to the brain. If that wasn’t enough, the message was transmitted over thousands of miles via the internet from the brain of one person in India to not one, but three people located in France.

What’s truly remarkable about this achievement is that it wasn’t performed using alien, state-of-the art technology. The researchers simply made use of neurorobotics software and hardware that have been developed by several labs in recent years, albeit in an extremely clever way.

Messaging at the speed of thought

“We wanted to find out if one could communicate directly between two people by reading out the brain activity from one person and injecting brain activity into the second person, and do so across great physical distances by leveraging existing communication pathways,” said one of the team, Harvard’s Alvaro Pascual-Leone in a press release. “One such pathway is, of course, the Internet, so our question became, ‘Could we develop an experiment that would bypass the talking or typing part of internet and establish direct brain-to-brain communication between subjects located far away from each other in India and France?'”

Yes, they could. Here’s how it all works:

A second similar experiment was conducted between individuals in Spain and France, with the end result a total error rate of just 15 percent, 11 percent on the decoding end and five percent on the initial coding side.

I mentioned telepathy earlier and how this present process does constitute telepathy per se. It’s one heck of a good start in this direction, however. It’s not hard to imagine a refined setup where this sort of communication is fluid. The phosphenes should be relayed extremely precisely (a 15% error is just too much for a complicated message, let a alone a simple sentence) and the receiver should be able to interpret the flashes really quickly in order to sustain a fluid conversation. Alternatively, the computer to brain interface might become advanced enough to stimulate precise neural networks in the brain that cause the mind to welcome a certain thought (words). Imagine initiating ‘assisted telepathy’ and having your mind flooded with someone else’s thoughts. If such a thing would ever be possible (remember, primitive first successful steps forward do not guarantee sophisticated goals. The challenges ahead become orders of magnitude more intense. It’s like classical mechanics versus quantum physics), then this would have an immense potential to transform the world. A whole new suit of ethics would need to be revised. The freedom of one’s mind is considered the ultimate bastion, after all.

“By using advanced precision neuro-technologies including wireless EEG and robotized TMS, we were able to directly and noninvasively transmit a thought from one person to another, without them having to speak or write,” says Pascual-Leone. “This in itself is a remarkable step in human communication, but being able to do so across a distance of thousands of miles is a critically important proof-of-principle for the development of brain-to-brain communications. We believe these experiments represent an important first step in exploring the feasibility of complementing or bypassing traditional language-based or motor-based communication.” 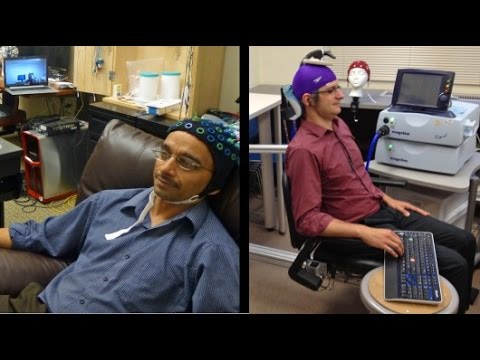