by Tibi Puiu
in Biology
Reading Time: 3 mins read
A A
Share on FacebookShare on TwitterSubmit to Reddit 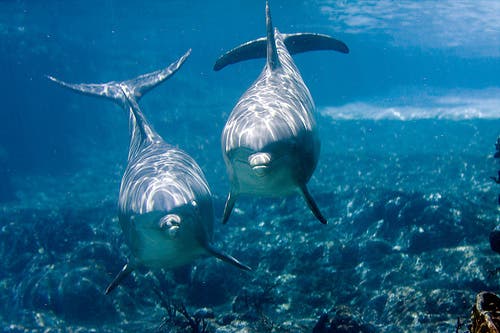 After staying awake for many hours or days at time, humans and other mammals alike are forced to sleep, not because the body asks it, but because the brain inevitably calls for a shut down of the conscious psyche, in order to replenish and function properly when awake. Dolphins, however, have been found to have a remarkable resistance to sleep deprivation, as scientists discovered that they’re capable of staying alert for 15 days straight. How is this possible? Dolphins sleep with only half a brain, and regularly switch between sides.

“After being awake for many hours or days, humans and other animals are forced to stop all activity and sleep,” said researcher Brian Branstetter, a marine biologist at the National Marine Mammal Foundation in San Diego. “Dolphins do not have this restriction, and if they did, they would probably drown or become easy prey.”

Dolphins use a sort of native sonar to map their environments, in order to navigate through murky waters, find their peers and identify threats, by emitting their famous “clicking” sounds and probing the echo responses. Scientists tested this ability over a long period of time to see whether dolphins respond. They immersed a sound projector and microphone under water that respond with sounds mimicking dolphin clicking echoes, essentially acting as phantom targets.

The biologists at National Marine Mammal Foundation in San Diego trained two dolphins, a female Say, and a male, Nay, to press a paddle which retrieved food whenever they detected the phantom targets – the dolphins often squealed in sign of victory whenever they succeeded. The researchers found that the dolphins could employ their native echolocation with great accuracy with no sign of deterioration for up 15 days. This period could have very likely been greater, since the biologists restricted their observations to this time frame only.

The findings suggest that dolphins evolved this function to avoid drowning, but most importantly to remain vigilant in the wake of predators, like sharks. Upcoming research plans on scanning dolphin brains for electrical activity via electroencephalogram, or a EEG to better assess how long dolphins can stay alert.

“Research with freely moving humans who wear portable EEG equipment has been conducted; training a dolphin to wear a similar portable EEG backpack that is capable of withstanding and functioning in an ocean environment presents much greater challenges,” Branstetter said. “However, these hurdles are not insurmountable. Also, we are interested in investigating if dolphins can perform more complex cognitive tasks without rest, like problem-solving or understanding an artificial language.”

Findings were detailed in the journal PLoS One.