Doctors in Pittsburg are stunned by the ability of a patient who reached a never seen before mental control level of a robotic arm. 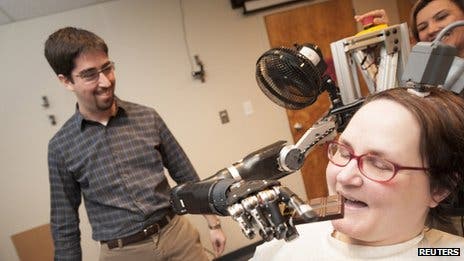 Jan Scheuermann, 53, who is paralyzed neck down, was able to move, grasp and release a variety of common household items with the same ability as with a normal arm. Experts in the field explained it was an “unprecedented performance” and a “remarkable achievement“.

Jan trained hard with doctors and quickly learned how to make fluid, coherent movements with the robotic arm, and in time, she became better and better at controlling, showing how important the human control really is for the process. 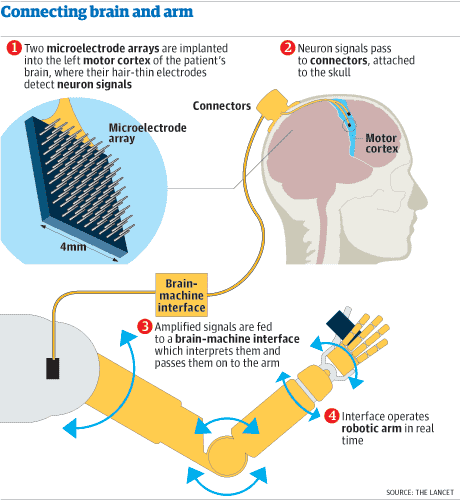 In order for this technology to work, she had two sensors (electrodes) implanted in the brain – each 4 by 4 millimeters apart, in the motor cortex of her brain. The motor cortex is the part of the brain responsible in the planning, control, and execution of voluntary movements. After that, no less than a hundred tiny needles on each sensor picked up the electrical activity from about 200 individual brain cells.

“The way that neurons communicate with each other is by how fast they fire pulses, it’s a little bit akin to listening to a Geiger counter click, and it’s that property that we lock onto,” said Professor Andrew Schwartz from the University of Pittsburgh.

The electric pulses from the brain are translated to the arm, which is told to bend the elbow or the wrist, or to grab and release objects. The design is so effective that Jan was able to use some of its capacities after just 2 days of training; after that, over the course of 14 weeks, she became increasingly skillful, up to the point where she gained “co-ordination, skill and speed almost similar to that of an able-bodied person” by the end of the study.

Prof Schwartz explained such an accuracy of movement has never been achieved, and even they were a little surprised by it.

“We were blown away by how fast she was able to acquire her skill, that was completely unexpected,” he explained. “At the end of a good day, when she was making these beautiful movements, she was ecstatic.”

The field of harnessing a healthy brain to overcome a damaged body is advancing rapidly.

“They’re fluid and they’re way better, I don’t know how to say it any other way, they’re way better than anything that’s been demonstrated before. I think it really is convincing evidence that this technology is going to be therapeutic for spinal cord injured people. They are doing tasks already that would be beneficial in their daily lives and I think that’s fairly conclusive at this point.”