by Tibi Puiu
in Genetics, Studies
Reading Time: 3 mins read
A A
Share on FacebookShare on TwitterSubmit to Reddit

A remarkable research whose findings recently published in the journal Cell, concludes that intense physical exercise leads to chemical alteration of the DNA, turning certain genes on and off. In fact, individuals which lead a relatively sedentary lifestyle changed the DNA in their muscle fibers almost immediately, after a strenuous 35 minute work-out. 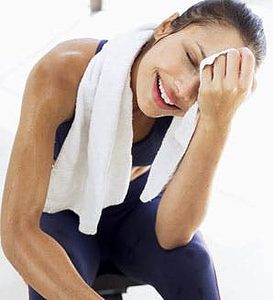 It’s important to note that the genetic code itself wasn’t altered, only the chemical tags. Genes, such as the one responsible for energy production, can be turned on and off through a process called methylation, in which a methyl group is added to a gene. When this happens, the chemical blueprint which instructs the production of certain proteins is modified. This might well explain why cells benefit from exercise, but begs an even more interesting question – “Do we carry some consequence of whether our parents were active or not?” asks study coauthor Romain Barrès of the University of Copenhagen.

Unfortunately, this questions wasn’t addressed in this particular research, which instead sought to track immediate chemical changes in the DNA and how other proteins recognize it, and thus regulate the production of specific proteins to support higher growth and the breakdown of sugar and fats with exercise.

The study focused on two groups of volunteers – those who had completed low- and high-impact cycling workouts. Biopsied cells from the volunteers’ thigh tissue was analyzed and revealed that muscle cells had fewer methyl groups attached to DNA and higher levels of blueprints for energy-regulating proteins after a hard work-out, compared with cells that had undergone a low-impact workout. What’s the bare minimum? According to the researchers, running or biking at a level of exertion where it’s hard to carry on a conversation for about 35 minutes.

“What this likely suggests is that if you did this early in life, while muscles were being developed, that might actually program the muscle,” says Michael Skinner, a researcher at Washington State University in Pullman.

The second leg of their study was at least as interesting. Calcium has been known to biologists for decades that it’s an inter-cellular signaling molecule, which informs muscles when they need to contract. The researchers bathed rat muscle cells into caffeine, which an agent that releases calcium from calcium-storage sites within muscle cells. What happened next was t the muscles were being tricked into think they were exercised. Also, it was observed that caffeine exposure also results in fewer methyl groups and more protein blueprints produced.

The researchers findings will most likely offer new insightful regarding the role of methylation muscle function and development, as well as hopefully motivate people to exercise more often. Hopefully, the researches will continue for where their left off and study whether these kind of DNA chemical modifications are transmissible to offsprings.