by Mihai Andrei
in Genetics, Studies
Reading Time: 2 mins read
A A
Share on FacebookShare on TwitterSubmit to Reddit 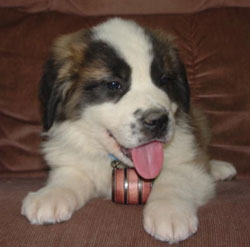 This dog is famous in the world because it is very big but very gentle – also, thanks to a certain Beethoven movie. The ancestors of the St. Bernard are the herding dogs of Swiss farmers like the Greater Swiss Mountain Dog, as well as hunting dogs and watchdogs. Their history has also been connected with the hospice at the Great St. Bernard Pass, hence the name.

First reports of the dogs’ presence at the pass date to the 17th century, and they remained loyal companions to the monks there.The scientists at The University of Manchester say that changes to the shape of the breed’s head over the years can only be explained through human-directed evolution through selective breeding, an artificial version of natural selection. They have looked at the skulls of 47 St Bernards spanning 120 years.

“We discovered that features stipulated in the breed standard of the St Bernard became more exaggerated over time as breeders selected dogs that had the desired physical attributes,” said Dr Klingenberg. “In effect they have applied selection to move the evolutionary process a considerable way forward, providing a unique opportunity to observe sustained evolutionary change under known selective pressures.”.

This shows again that evolution is the force behind the shift of dynamics in the evolution of life.

The most known St. Bernard aside from the movie character Beethoven is Barry who has saved somewhere from 40 to 100 lives. He even has a monument in the Cimetière des Chiens, and his body was preserved in the Natural History Museum in the city of Berne.