A few days ago, the FDA approved the genetic engineering of modified Atlantic salmon variety. This is the first food animal that was genetically modified that the FDA approved for human consumption and farming; the gene alteration would make it grow much faster. Public reactions have been mixed, as expected. This could be a very good move, greatly reducing the stress on wild populations, but people are always reluctant when it comes to GMOs - especially animals.

by Mihai Andrei
in Genetics, News
Reading Time: 4 mins read
A A
Share on FacebookShare on TwitterSubmit to Reddit

A few days ago, the FDA approved the genetic engineering of modified Atlantic salmon variety. This is the first food animal that was genetically modified that the FDA approved for human consumption and farming; the gene alteration would make it grow much faster. Public reactions have been mixed, as expected. This could be a very good move, greatly reducing the stress on wild populations, but people are always reluctant when it comes to GMOs – especially animals. 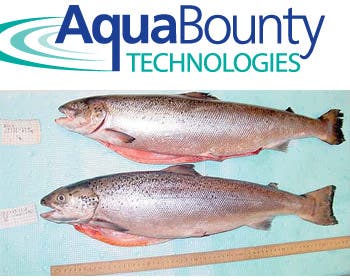 Reactions have been interesting from the scientific community as well – and generally positive. Dr. Garth Fletcher, Professor Emeritus and Head of the Department of Ocean Sciences at the Memorial University of Newfoundland hailed it as a laudable achievement:

“This approval is good news for all academic researchers interested in genetic modification of animals being bred for human consumption. The pioneering efforts of AquaBounty working with FDA regulatory authorities has demonstrated that with care, good science, and patience, innovative research in this somewhat controversial field can be taken from the laboratory bench to the market place.”

“In my opinion, the review process undertaken by the FDA has been extremely thorough so I think it reasonable to assume that the conclusions they have drawn and the recommendations they have made are well supported by the evidence. From that perspective there is no evidence that these fish pose a risk to human health but time will tell whether they will be accepted by consumers.”

But Dr. Anne Kapuscinski, Professor of Environmental Studies at Dartmouth College was a bit more circumspect.

“This approval shows us how the FDA will apply the drug law to more applications to farm genetically engineered salmon. More applications are coming because this first approval applies to a small farm in Panama that will barely make a dent in the global market of farmed salmon. I see incremental improvement in how the FDA applied science in the environmental assessment, but I don’t see the scientific quality required to assess many larger applications.”

Indeed, this is a valid point – what kind of a difference can this make on a global (or even regional) scale for fish populations? Perhaps even more importantly, how does that compare to the risk of the fish escaping in the wild?

“This worries me because the drug law forces the FDA to keep secret a genetically engineered animal’s environmental assessment unless the applicant wants it to be public. The environmental impact of this GE salmon approval hinges on keeping it from getting out into nature. The FDA concluded it is environmentally safe because the hatchery in Canada and farming operation in Panama have multiple, complex barriers to escape, but it will be a real challenge to scale up this approach to many and larger salmon farms. This is why my comments to the FDA urged for a quantitative analysis of possible failures in the confinement measures, which are easy to do for this application. I urged the FDA to model the scientific rigor the agency will expect in future applications. The FDA seems to have read my advice but chose to interpret it very narrowly and decided to not require a quantitative failure mode analysis.”

But perhaps the more important thing about this decision is not that it allows the development of genetically modified salmon, but that it creates a precedent. Although breeders have selectively bread their animals for centuries, this is the first time a direct genetic modification has been approved. Eric Hallerman, Professor of Fish Conservation, Virginia Tech University highlights this point:

“This approval follows extensive review of food safety and environmental safety under the authority of the U.S. Food, Drug and Cosmetics Act. The action allows pilot-scale production at these specific facilities, which will be critical for quantifying the economics of production and the efficacy of confinement. Yet, the significance of the action is that it marks the first approval globally for production of genetically modified animals for purposes of food production and sale.”

But he also underlines another interesting aspect – that of labeling.

“Today’s action is significant for another reason, as FDA also announced draft guidance on the voluntary labelling of food derived from the product. Much controversy has focused on whether and how foods derived from biotechnology should be labelled. While studies have shown that salmon products derived from the AquAdvantage salmon are no different from those derived from conventional production, some consumers have argued for a ‘right to know’ how food products were produced.”