Two recently released studies by teams of international researchers sequenced the genomes of two major strains of the parasitic disease known as malaria. Their findings show that malaria is a lot more resistant than previously thought, but at the same time helps paint a broader picture which will certain aid in developing more effective treatment, which might one day lead to the eradication of the disease. 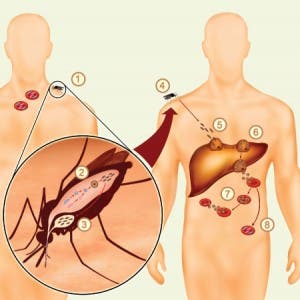 Malaria is a parasitic disease that involves high fevers, shaking chills, flu-like symptoms, and anemia. The disease is caused by a parasite which is carried by mosquitoes and infect humans through bites.  After infection, the parasites (called sporozoites) travel through the bloodstream to the liver; here they mature and release another form, the merozoites. The disease is a major health problem in much of the tropics and subtropics, and an  estimate 1 million people die from it each year.

In one of the studies, the researchers examined Plasmodium vivax (P. vivax) strains from different geographic locations in West Africa, South America, and Asia – the first genome-wide perspective of global variability within this species. Their analysis rendered worrisome results; apparently P. vivax has twice as much genetic diversity as the world-wide Plasmodium falciparum (P. falciparum) strains. This means that it has a much better capability of evolving and thus avert treatment. Bad news can almost always make a turn for the better if you can read the good points that come from it. Now, armed with a better understanding of the parasitic strain, researchers can develop new strategies for battling it.

“The bad news is there is significantly more genetic variation in P. vivax than we’d thought, which could make it quite adept at evading whatever arsenal of drugs and vaccines we throw at it,” said Professor Jane Carlton, senior author on both studies and part of New York University’s Center for Genomics and Systems Biology. “However, now that we have a better understanding of the challenges we face, we can move forward with a deeper analysis of its genomic variation in pursuing more effective remedies.”

In the second study, scientists from Japan’s Osaka University sequenced three genomes of Plasmodium cynomolgi (P. cynomolgi), a close relative that infects Asian Old World monkeys, marking the first time this strain has been sequenced. The genetic make-up was then compared to P. vivax and to Plasmodium knowlesi (P. knowlesi), a previously sequenced malaria parasite that affects both monkeys and humans in parts of Southeast Asia. Since its very similar to P. vivax, their findings will aid future efforts of elaborating treatment for all forms of malaria.

“We have generated a genetic map of P. cynomolgi, the sister species to P. vivax, so we can now push forward in creating a robust model system to study P. vivax,” explained Tanabe. “This is important because we can’t grow P. vivax in the lab, and researchers desperately need a model system to circumvent this.”

The researchers’ findings were published in the journal Nature Genetics.