by Tibi Puiu
in Genetics, Health & Medicine
Reading Time: 3 mins read
A A
Share on FacebookShare on TwitterSubmit to Reddit

Researchers have developed a gene engineered vaccinia virus JX-594 – one of the pox viruses – that selectively kills cancer cells and increases immune system response. In a clinical trial of 30 terminally-ill liver cancer participants, where doses were randomized, the researchers found that the median life expectancy significantly prolonged.

“For the first time in medical history we have shown that a genetically-engineered virus can improve survival of cancer patients,” study co-author David Kirn told AFP.

“Despite advances in cancer treatment over the past 30 years with chemotherapy and biologics, the majority of solid tumours remain incurable once they are metastatic (have spread to other organs),” the authors wrote. 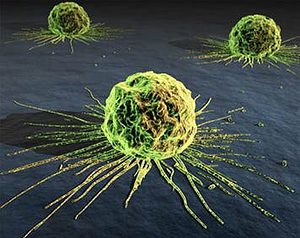 The vaccine called  Pexa-Vec or JX-594 was used for four weeks during a clinical trial in which two doses for the vaccine were used – high and low – in order to the test the body response. During this test phase it was found that the drug was safe with no significant side effects, other from one high dosing participant who experienced severe nausea and vomiting. All of the study participants suffered from suffered from flu-like symptoms for 24 hours after the injection, however no intense complications were observed.

MRI scans were performed on the liver of each of the participants by an independent group that was oblivious to the scope of the study, and thus the dosage of the vaccine. Results showed that no matter the dosage, tumors were killed off, with more anti-tumor activity signaled in high dosage patients. Subjects also developed an immune response to the B-gal, which is what was added to the JX-594 to produce an immune response.

On the actual numbers on survival, though. Sixteen patients given a high dose of the therapy survived for 14.1 months on average, compared to 6.7 months for the 14 who got the low dose. What’s impressive to note, however, is that some of these patients didn’t respond to any kind of treatment before, and as such their median life expectancy was of 2-4 months. For all six high dosage subjects who had previously failed systemic therapy of some form the median survival rate was of 13.6 months, and two of them survived more than 2 years. This is a dramatic improvement!

Next the researchers plan to extend their clinical trial to 120 participants to better assess the effectiveness of the JX-594 vaccine and the potential side effects associated with the vaccine. What’s important to note, however, is that while this drug might significantly prolong the lives of terminally ill cancer patients, it won’t cure them.

Findings were reported in the journal Nature Medicine.