Lung cancer may be detected with a cheek swab 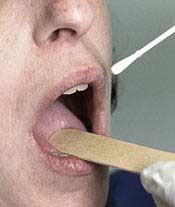 It is always better to prevent than to treat, but when you have no other choice but treatment, the absolute best thing you can do is treat it early.However, by the time the first symptoms appear, it is often too late to do anything. Thus, helping victims cope with it is very difficult as it seems to have come out of nowhere.

Detecting cancer in its early stages often makes the difference between life and death and early detection is directly related to the cancer survival rates. Researchers from Northwestern University and NorthShore University HealthSystem (NorthShore) have recently developed a method that relies on a pioneering technique (biophotonic) to detect early signs of lung cancer.

Lung cancer is well known for being extremely difficult to pinpoint, but with this method, the problem can be solved; what they do is basically shine diffuse light on cells swabbed from patients’ cheeks.

“By examining the lining of the cheek with this optical technology, we have the potential to prescreen patients at high risk for lung cancer, such as those who smoke, and identify the individuals who would likely benefit from more invasive and expensive tests versus those who don’t need additional tests,” said Hemant K. Roy, M.D., director of gastroenterology research at NorthShore.

The breakthrough technique is called partial wave spectroscopic (PWS) microscopy and was developed by Vadim Backman, professor of biomedical engineering at Northwestern’s McCormick School of Engineering and Applied Science. Lung cancer is not only hard to detect, but it’s also causes a lot of victims; in the US, it is the leading cause of cancer deaths, and survival rates are high only when detected early. However, by the time the first symptoms appear, it is often too late to do anything.

Still, PWS shows great promise; it can detect cells as small as 20 nanometers and uncover differences that appear normal with standard microscopy techniques.

“Despite the fact that these cells appear to be normal using standard microscopy, which images micron-scale cell architecture, there are actually profound changes in the nanoscale architecture of the cell,” Backman said. “PWS measures the disorder strength of the nanoscale organization of the cell, which we have determined to be one of the earliest signs of carcinogenesis and a strong marker for the presence of cancer in the organ.”

“PWS is a paradigm shift, in that we don’t need to examine the tumor itself to determine the presence of cancer,” added Hariharan Subramanian, a research associate in Backman’s lab who played a central role in the development of the technology.

The lung cancer findings are published only by Cancer Research, and the printed paper will appear on Oct 15.

Note: This article is not intended to provide treatment, diagnosis or medical advice in any way.