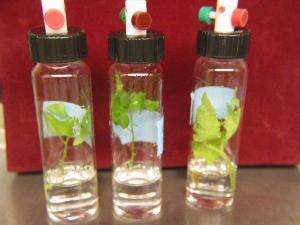 Scientists are working out different ways to improve air quality and clean up contaminated sites. In numerous cases the simplest, most natural solution is the most efficient. This could be the case here as they try to break certain kinds of pollutants into harmless byproducts, the key answer could be held by some plants.

These plants are able to take up nasty groundwater pollutants and incorporate them into their roots, stems and leaves or release into the air. The problem is that plants stop growing in winter and this means that the cleaning stops for the colder period.

But scientists believe they have found a solution to that problem; a group led by the University of Washington’s Sharon Doty, reporting in the Proceedings of the National Academy of Sciences, say that some genetically engineered poplar plants which are grown in labs are able to take as much as 91 percent of trichloroethylene; trichloroethylene is the groundwater contaminant which does the most damage in the U.S. and probably, not just there. The poplar plants also are able to break down, or metabolize, the pollutant into harmless byproducts and they do this with 100 times the efficiency of a control plants.

The contaminated groundwater is treated with a variety of chemical, physical and microbial methods but the results are not that good. Stuart Strand, UW professor of forest resources and a co-author of the paper says that “[the existing process] It’s destructive, disruptive and expensive,” so a solution is needed.

“We overcame the rate-limiting step by causing the poplar plants to overexpress the first enzyme in the degradative pathway,” Doty said. “Using the mammalian gene is just a step toward the day when we understand the poplar P450 genes well enough to use promoters to enhance production of their own enzymes that degrade contaminants. With the plant’s own genes, the results should be even better.”.

They are going to do some more tests but transgenic trees planted at contaminated sites could be something very useful.