Mice with genetic hearing loss could sense and respond to noises after receiving working copies of their faulty genes, researchers report. Because the mice’s mutated genes closely correspond to those responsible for some hereditary human deafness, the scientists hope the results will inform future human therapies.

In Mark 7:31-34, everyone’s favorite Galilean cured a deaf man so that he could hear again. Not ones to be one up-ed so easily, researchers injected genetically modified viruses – a procedure known as virotherapy – to replace faulty genes in mice with genetic deafness to help restore their hearing, and the results are promising.

We wrote about how gene therapy was used to restore hearing in guinea pigs and how drugs were used to promote regeneration in mice’s ears. But those trials aimed to treat the effects of noise trauma. Now, researchers tried to restore hearing to mice that suffered from genetic hearing loss.

Some of them could sense and respond to noises after receiving working copies of their faulty genes, researchers report on July 8 in Science Translational Medicine. Because the mice’s mutated genes closely correspond to those responsible for some hereditary human deafness, the scientists hope the results will inform future human therapies.

The ear uses specialized sound-sensing cells, named hair cells that convert movement in their environment -i.e. noises- into information the brain can process. Hair cells need specific proteins to work properly, and alterations in the genetic blueprints for these proteins can cause deafness.

To combat the effects of two such mutations, the scientists injected viruses containing healthy, functioning versions of the genes into the ears of deaf baby mice. The virus infected some hair cells, giving them working genes.

The method was used on mice showing two different types of deafness-causing mutations. For one of them, mice showed neural activity indicative of hearing, and even jumped (adorably so, probably; the study sadly does not mention) when exposed to loud noises. Treated mice with the other mutation didn’t respond to noises, but the gene therapy helped their hair cells — which normally die off quickly due to the mutation — survive. All of the untreated mice, in the control group, remained deaf. 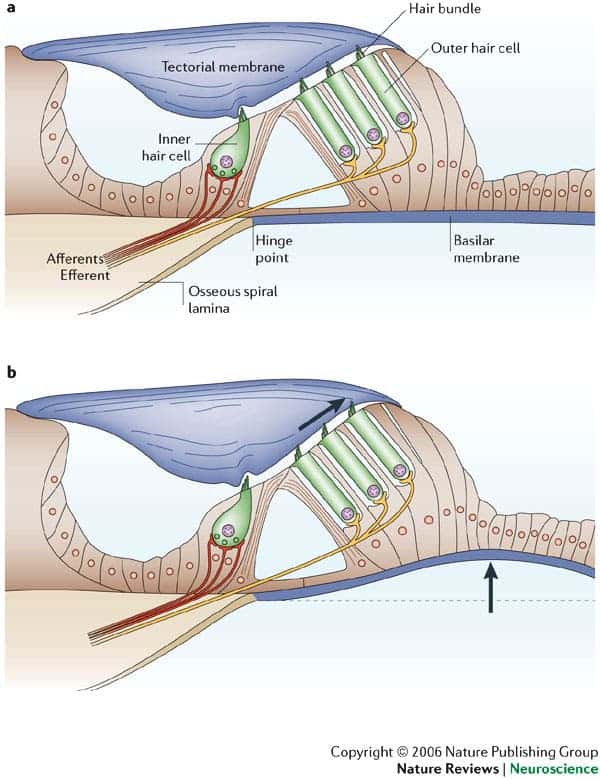 The scientists hope to eventually identify the right virus and genetic instructions to treat all hair cells and get complete recovery of hearing, says study coauthor Jeffrey Holt, a neuroscientist at Boston Children’s Hospital. The team’s immediate goals are to improve the viral infection rate and test if the treatment can last for long time periods, Holt says. He also mentioned that the viruses used to deliver the genes are safe and already used in human gene therapies.

Gene therapies must work as well as existing cochlear implant technologies to become a good treatment option, Lustig adds. But a functioning inner ear would ultimately do a far better job than any cochlear implant could.

“Ultimately, we’ll get there.”