Hearing restored in mice after hair cells were regenerated through drug

by Tibi Puiu
in Health & Medicine, Research
Reading Time: 3 mins read
A A
Share on FacebookShare on TwitterSubmit to Reddit

Hearing loss is a grave healthcare problem around the world, with 50 million cases in the US alone. The most common type is sensorineural hearing loss caused by the degradation and loss of sensory hair cells in the cochlea (the auditory part of the inner ear). While implants and various other hearing aids can improve hearing a tad, significant improvement can not be achieved since these sensory hair cells do not regenerate for mammals. In a remarkable breakthrough moment, scientists at Massachusetts Eye and Ear and Harvard Medical School developed a drug that can regenerate sensory hair cells in mouse ears damaged by noise trauma.

Fluid movement in the inner ear (cochlea), like sound waves propagating, causes changes in tiny structures called hair cells. As these hair cells move, electrical signals from the cochlea are sent up the auditory nerve to the brain, which is then converted into information we can commonly refer to as sound. Hair cell loss comes from noise exposure, aging, toxins, infections, and certain antibiotics and anti-cancer drug.

“Hair cells are the primary receptor cells for sound and are responsible for the sense of hearing,” explains senior author, Dr. Albert Edge, of Harvard Medical School and Mass. Eye and Ear. “We show that hair cells can be generated in a damaged cochlea and that hair cell replacement leads to an improvement in hearing.” 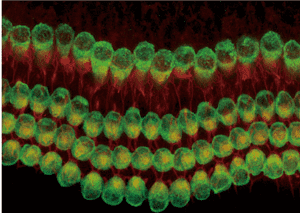 Birds or fish can regenerate their damaged or lost hair cells, however mammals can not. The researchers tested their novel drug by applying it to the cochlea of deaf mice, which had their hearing impaired from sound trauma. The drug works by inhibiting an enzyme called gamma-secretase that activates a number of cellular pathways. The drug applied to the cochlea inhibited a signal generated by a protein called Notch on the surface of cells that surround hair cells. These supporting cells turned into new hair cells upon treatment with the drug.

After the drug was administered significant hearing improvements were observed in mice, and further observations showed that improved hearing could be traced to the areas in which supporting cells had become new hair cells. The breakthrough is the latest in a slew of research that demonstrate hearing improvements in mammals – previously, we reported how improvements in mice hearing were made after scientists injected the cochlea with nasal stem cells, hair cell regeneration in gerbils again through stem cells and gene therapy that rendered similar results in guinea pigs.

“The missing hair cells had been replaced by new hair cells after the drug treatment, and analysis of their location allowed us to correlate the improvement in hearing to the areas where the hair cells were replaced,” Dr. Edge said.

“We’re excited about these results because they are a step forward in the biology of regeneration and prove that mammalian hair cells have the capacity to regenerate,” Dr. Edge said. “With more research, we think that regeneration of hair cells opens the door to potential therapeutic applications in deafness.”

Findings were documented in the journal Science.