by Tibi Puiu
in Genetics, Health & Medicine
Reading Time: 3 mins read
A A
Share on FacebookShare on TwitterSubmit to Reddit 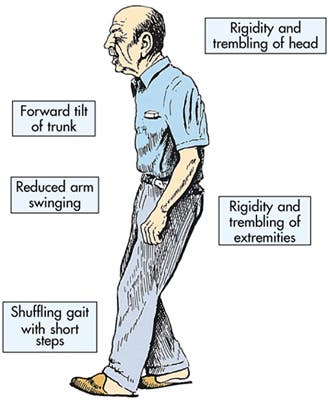 While gene-therapy is still regarded as a very innovative practice, it seems like the procedure might take traction as of today when remarkable results were concluded after the first successful double-blind gene therapy for Parkinson disease. In the case of this dreadful disease, medical researchers injected patients with a a gene that codes for glutamic acid decarboxylase (GAD), an enzyme that catalyses production of an inhibitory neurotransmitter called gamma-aminobutyric acid (GABA).

Usually Parkinson patients produce too little GABA in their brains, and as a result overstimulation in an area of the brain called the subthalamic nucleus occurs, which in turn inhibits dopamine secretion, which is vital for movement. This is why Parkinson patients are described as having tremors, sluggish movements, rigid muscles and impaired posture and balance.

Andrew Feigin of the Feinstein Institute for Medical Research in Manhasset, New York, and colleagues conducted a double-blind test for GAD gene-therapy on a group of 65 patients. In this particular case, double-blind test refers to the fact that patients were grouped into patients who received a placebo surgery (a simple saline solution injected in the back of the skull) and those receiving real surgery (the skull was drilled and a virus containing the GAD gene was injected). Neither patients, nor researchers knew who was given a placebo or not when test results came in, apart from the surgeons – hence the double-blind test.

In the trial, 22 Parkinson’s patients had a gene inserted in their brains to produce more GABA, while twenty-three patients received the placebo. Six months later, researchers analyzed the results and came up with something remarkable – gene therapy patients showed improvements in their motor functions of 23.1 per cent, while also remarkably interesting those who were given a sham procedure scored an improved of  just 12.7 per cent.  The researchers rated the patients’ symptoms, including the severity of tremors and stiffness, and came up with a single “motor score” that represented how well they could move.

The treatment is intended for a subgroup of Parkinson’s patients — those who do not respond to medication very well. Of the 1 million to 1.5 million Americans with Parkinson’s, about 10 to 15 percent of them, or 100,000 to 200,000 people, fit into this category, said study researcher Dr. Michael Kaplitt, vice chairman for research in the Department of Neurological Surgery at Weill Cornell Medical College in New York.

The therapy came just in time for Dr. Walter Liskiewicz, 60, a Jackson oral surgeon so disabled with Parkinson’s that he could not walk before his July 2009 procedure.Now, he not only walks with a cane but he’s back playing a harmonica and writing smooth jazz.

The study “brings us much closer to having a gene therapy that might be ready for general use,” Kaplitt said. The work paves the way for gene therapies for other types of brain diseases, he said. “I think we are now helping to facilitate and to accelerate the development of a whole host of gene therapies … for diseases such as Alzheimer‘s disease, epilepsy [and] depression,” he said.

The results are indeed very satisfying, but since the actual procedure was made only on 22 Parkinson patients, further investigation is required.