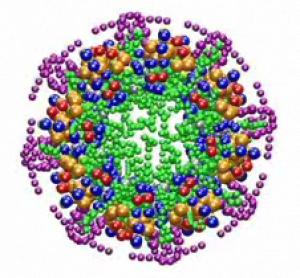 Understanding the mechanisms which take place is something scientists are have been trying to figure out for ages; because of it’s small size, maping it and understanding some things seems almost impossible, but this is a very important step in solving some molecullar puzzles. This would in fact speed up significantly the process of discovering and understanding of cells.

A cell’s membrane-bound nucleus vital components so it’s vital to be very careful about what enters and leaves this important zone. In order to do this, the cell uses hundreds to thousands of nuclear pores as its gatekeepers, selective membrane channels that are responsible for regulating the material that goes to and from a cell’s DNA and the signals that tell a cell what to do and how to do it. But understanding and visualizing these processes is virtually impossible with the existing methods. But according to Rockefeller scientists which published their studies in Nature the upper image would be the first complete molecular picture of this huge, 450-protein pore.

This provides valuable information and even gives a glimpse regarding how the nucleus evolved. The computer which does the job sorted through about 200,000 different configurations of the pore’s component proteins, finding about 1,000 possible, very similar structures that fully satisfied all the thousands of restraints provided by experimental data: restraints such as which protein could be next to which, or where that large protein had to be in relation to this small one. Scientists described this situation as a huge puzzle which had to be solved.

“Evolution is a process of duplication and divergence,” Rout says. He and his colleagues saw clear evidence of this when they color-coded the proteins in the pore. One method of color coding revealed alternating stripes, like spokes on a wheel: For every protein, there was another one that looked quite similar. Color coding a different way showed the same pattern in the pore’s outer and inner rings, one of which appears to be a slightly modified duplication of the other. These are evidence of duplication events, Rout says, showing that the evolution of the complicated nuclear pore was a more straightforward affair than previously thought. “It’s made of many different variations of a theme of just one unit.”