Gecko tail has a mind of its own

by Mihai Andrei
in Anatomy, Health & Medicine
A A 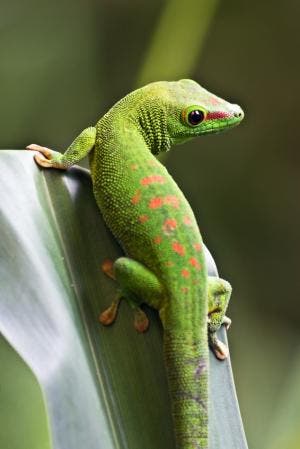 The (awesome) ability of geckos and other related reptiles to shed their tale when endangered by predators has been known for a long time, but scientists know little about the movement, and especially what controls the movement of the tail once it’s separated from the tail. Anthony Russell of the University of Calgary and Tim Higham of Clemson University in South Carolina put a lot of time and effort into solving this mystery.

What’s interesting is that after it separates from the body, the tail does not only have rhythmic movement, but also flips, jumps and lunges, exhibiting a complicated movement pattern. Studying and understanding this behavior could be extremely useful for further spinal cord studies.

“Much is known about the ecological ramifications of tail loss, such as distracting predators, storing energy reserves and establishing social status but little is known about the pattern and control of movement of automized gecko tails,” says Russell a biological sciences professor at the U of C. “What we’ve discovered is that the tail does not simply oscillate in a repetitive fashion, but has an intricate repertoire of varied and highly complex movements, including acrobatic flips up to three centimetres in height.”

However, this is just the first step, and more efforts should be put into this research.

“An intriguing, and as yet unanswered, question is what is the source of the stimulus is that initiates complex movements in the shed tails of leopard geckos,” says Higham. “The most plausible explanation is that the tail relies on sensory feedback from the environment. Sensors on its surface may tell it to jump, pivot or travel in a certain direction.”