Flu’s coming, but which kind?

by Mihai Andrei
in Diseases, Health & Medicine
Reading Time: 8 mins read
A A
Share on FacebookShare on TwitterSubmit to Reddit

The beginning of autumn brings cold weather, and with it, another type of flu. We here at ZME have already all gone down with a bad case of the flu, and of course, we’re not nearly the only ones. Each year seems to bring the threat of a new flu virus; first it was the avian flu, transmitted from birds to humans, then it was the swine flu, and last spring, Chinese authorities announced the discovery of another strain of flu, H7N9 which passes from birds to humans. So what’s next?

Here, we publish an interview released by Hardvard, with Marc Lipsitch, professor of epidemiology and director of the Center for Communicable Disease Dynamics at the Harvard School of Public Health. Staff writer Alvin Powell of the Harvard Gazette sat down with him for the questions: 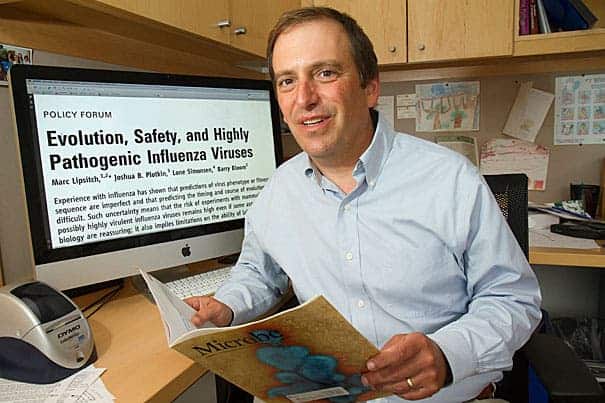 GAZETTE: What’s the difference between seasonal flu and pandemic flu?

LIPSITCH: Pandemic flu is something that has happened four times in the last 100 years. It is the appearance and spread of a strain of flu that is novel to our immune systems, whose surface proteins are different from those that are already circulating.

Not every novel strain of influenza A causes a pandemic, because most strains of flu A are not easily transmissible human-to-human. For example, H5N1 [the subject of controversy in 2012 after scientists created an strain easily transmissible in lab animals] is called bird flu because it does transmit very well between birds but does not currently transmit very well between people.

Flu season begins at various times in different years but typically between October and January, and continues for a couple of months or so. And the late fall/winter seasonality has been a topic of great interest for some time, but there are so many things that are different in the winter that it’s hard to untangle.

Some work that I did with Jeff Shaman at Columbia and other collaborators showed that one of the very important contributors to seasonality is absolute humidity, which is the quantity of water vapor in the air. We don’t really know what the biophysical mechanism is for why increased absolute humidity reduces virus survival and transmission, but it does.

Clearly another contributor is school. There’ve been several studies suggesting that there’s about 20 percent more opportunities for transmission of flu during school terms than out of school terms. We’ve just submitted a paper trying to estimate the same quantity when schools opened in the 2009 pandemic and we get a similar answer.

GAZETTE: What’s the status of the latest strain to emerge, H7N9?

LIPSITCH: There were a few human cases as late as the early summer, and many epidemiologists are concerned that it may resurge later this year. Because it doesn’t cause severe symptoms in birds, it is hard to be sure how many birds are infected. Another thing we don’t really know is how many human cases we’re missing with H7N9.

Work is under way to figure out if there are people contracting infection with this virus but not getting sick enough for us to notice.

GAZETTE: How important is that piece of the puzzle in deciding how big a threat a flu virus is?

LIPSITCH: It’s probably the biggest piece of the puzzle.

Epidemiologists typically think of it as a pyramid or an iceberg. We see the severe cases because they are likely to show up at hospitals and some of them die. So we can piece together the top of the pyramid pretty quickly: how many need intensive care and how many die.

But what’s harder to tell is how big the base of the pyramid is, how many people are getting infected and not getting sick or just getting treated by their doctor for symptoms and not coming to the hospital.

The center that I direct has a close collaboration with a group in Hong Kong University that is doing a lot of the work to try to figure out exactly that question: how many undetected cases are there?

GAZETTE: The numbers I saw — 45 deaths out of 135 cases — seemed to indicate it was pretty serious.

LIPSITCH: But that’s with this piece missing. If the numbers we know now represented all the cases, it would be much worse than anything that’s ever been widespread in humans. But it’s unlikely that it’s that bad.

GAZETTE: How is MERS different from the flu?

LIPSITCH: It’s a coronavirus, related to the virus that causes SARS. It so far seems to show more signs of human-to-human transmission than H7N9 flu. Fortunately, it’s not so transmissible as to be out of control in any population we know about.

There is the same uncertainty as to how many people have it that we don’t know about and what role those people play in transmission. It’s very much like SARS in the early days. MERS seems to be a little bit less transmissible so it’s harder to figure out because the more transmission you get, the more data you get.

GAZETTE: The numbers from the CDC say MERS has caused 58 deaths out of 130 cases and that it has been found in several countries, including France.

LIPSITCH: It has been in France, but there is no evidence of ongoing transmission in France.

SARS also had a very high case fatality ratio among the sickest people and among elderly people, about 10 percent overall. It was almost zero in people under 50 and much higher in people over 50.

A lot of the people who’ve gotten MERS have been older and already in hospitals for other reasons: There was a big outbreak in a dialysis unit, for example. What the average case fatality ratio is in a healthy population, we don’t know. And how many people have been infected and missed [by public health officials] we also don’t know.

It would be very helpful to have genetic sequences from all the cases. It would also be helpful to identify what their common exposure is and, if there is a common exposure, what their animal reservoir is so we could be able to compare the virus and tell if it’s being introduced over and over again.

One of the exciting things about the ability to sequence viruses and bacteria quickly — which is one thing we focus on here — is that you can chart rates of transmission from person to person or across geography or across species based on the sequence similarity.

GAZETTE: So it’s possible that the cases have been introduced over and over from an animal reservoir rather than animal to human and then spreading through the human population?

LIPSITCH: Yes, it is some combination of the two, but we don’t know in exactly what proportion because we think we are missing cases.

GAZETTE: Do we need to watch for MERS during flu season as well as H7N9?

LIPSITCH: With SARS, a lot of the cases were in the spring, so maybe [it’s seasonal]. But for SARS and so far MERS, a lot of the transmission has been in hospitals, which is somewhat less prone to seasonality.

It seems both [MERS and H7N9] are at this stage not sufficiently transmissible between people to cause generalized infection in many parts of the world. But both viruses have relatives that we know can do that, so our concern is they become like those relatives through genetic change.

GAZETTE: Do they mutate rapidly?

LIPSITCH: Certainly influenza can mutate rapidly and can exchange genetic information with other strains by infecting the same cell: That’s how several of the previous pandemic viruses have emerged as a threat — reassortment of genetic information between two or more strains, some of which are good at infecting humans.

There’s been lots of concern that the Hajj [in mid-October] will be an opportunity to disperse [MERS] infected people around the world in large numbers from Saudi Arabia.

GAZETTE: What kinds of precautionary actions are normally taken at this stage?

LIPSITCH: Public health officials are doing what they can to characterize the epidemiology of both viruses. But if they become transmissible between humans, the epidemiology will change. Vaccine development is underway for H7N9.

In parts of China, they have tried closing poultry markets, but that was a temporary measure.

An immediate concern for MERS is to try to improve infection control in hospitals where transmission is a possibility.

GAZETTE: Given the ease of travel and the advent of modern medical technology, is there more or less danger of a pandemic today than in the past?

LIPSITCH: The ability to get a virus from one side of the world to another in a matter of hours is not just a possibility, but really happened with SARS and it will happen with a new pandemic flu strain.

The [medical] technology makes a huge difference to those who can access its benefits. Novartis just published a paper showing that they can, in less than a week, manufacture a flu vaccine from a sequence. That doesn’t mean they can create enough for everybody, it means they can create a small quantity of it. The question is how fast that can be scaled up.

In [the H1N1 pandemic in] 2009, even countries like ours that can pay a lot for a flu vaccine still couldn’t get it fast enough. The ability to make enough vaccine against any of these agents for global use is not there yet. There’s not the manufacturing capacity. We can spread it to everyone but we can’t protect everyone.

In terms of treatment, we have one or two effective drugs against flu. There’s nothing particularly effective against MERS that I’m aware of. So that’s an area where technology hasn’t advanced a lot in the last few years.

What was amazing about SARS is that even though there was no drug and no vaccine that worked, it was controlled and essentially driven extinct by old-fashioned public health measures, coordinated with 21st-century technology. The SARS experience shows that it is possible to control some respiratory viruses, if they’re the kind that give you sufficient warning, which is to say they tell you who you have to isolate and whose contacts you have to quarantine. That was really the critical thing with SARS. The only people who were infectious were the people who were sick.

But any flu that gets a foothold and starts transmitting human to human will be almost impossible to control in that way.