After being decapitated, flatworms not only grow back their head but also regain memories

by Tibi Puiu
in Animals, Health & Medicine, Science
Reading Time: 2 mins read
A A
Share on FacebookShare on TwitterSubmit to Reddit

Research on nematodes have always been convenient for scientists. For one, they grow and breed really fast, making them ideal for work pertaining to genetics. Some of them have amazing properties, like  the planaria or “flatworm”, which some scientists believe it possesses the indefinite ability to regenerate its cells and thus practically never grow old. It soon became the object of intense research as scientists are trying to unravel the key to its longevity and whether or not it could be possible to transfer it to humans.

The planaria’s startling regenerative abilities don’t end here apparently. Researchers at Tufts University have determined that the small, yellow worm is able to grow back a lot more than just its lost body parts: it can regain its memories too!

The idea was first suggested sometimes in the 1960s, however it was extremely cumbersome for scientists to prove at the time. Now, Tal Shomrat and Michael Levin at Tufts University built a computerized apparatus for training planarians that allowed them to to study planarian memory with less error and greater numbers of worms. 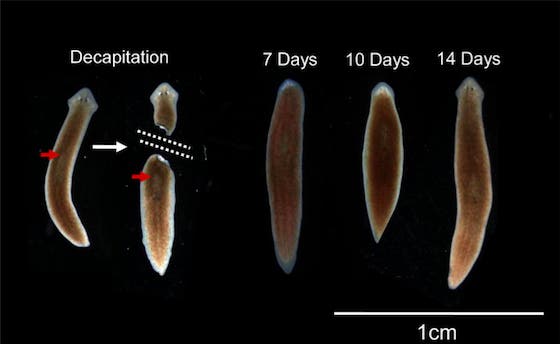 These small worms detest open spaces and bright lights, however some of them were trained by the researchers to ignore these stimuli and make their way through them to reach food. After decapitating specimens and after the worms grew back their heads, they were inserted back in the experimental set-up. Even after decapitation, worms that had gone through training were able to overcome their fears and start eating much faster than worms that hadn’t been trained. The scientists made certain that no bit of brain survived during the decapitation process.

It’s worth nothing, however, that the memories didn’t come back immediately. The researchers still had to teach them to ignore the bothersome stimuli, but only once, like a sort of reminder if you will. How is such a thing possible though? It’s still unclear how, but the scientists suggest the planaria might store their memories in various parts of their bodies, not just in the head. Alternatively, they suggest that the worms’ original brain may have modified their nervous systems, and their nervous systems may have then altered how the new brains formed during regrowth.

Levin says epigenetics may play a role—modifications to an organism’s DNA that dial certain genes up or down—”but this alone doesn’t begin to explain it.”

“We don’t have an answer to this,” he says. “What we do show evidence of is the remarkable fact that memory seems to be stored outside the brain.”

The study was reported in The Journal of Experimental Biology.