by Tibi Puiu
in Biology, Diseases, Health & Medicine
Reading Time: 3 mins read
A A
Share on FacebookShare on TwitterSubmit to Reddit

Located in the North Atlantic, right in between Greenland and Scotland, Faroe Islands is one of the smallest countries in the world. At the same time, however, it has also remained fairly isolated for many centuries, which in time has led to the formation of a distinct language and population. You can spot a native from a mile away, and in fact, they all seem to resemble each other quite well, at least in dominant features. This is because the country has a highly homogeneous population, even by Nordic standards, which puts it at high risk of developing genetic disorders. 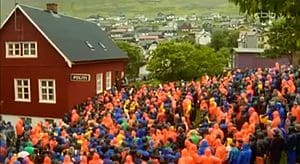 With this in mind, the local government recently implemented a program which aims to sequence the genome of all its citizens, or at least all of them who agree.  So far,  some 30,000 citizens — about three-fifths of the total population — have already submitted blood samples to its new Genetic Biobank. According to officials, the project doesn’t have an immediate goal in mind, however armed with such a complete database, whenever scientists have a better understanding of how the genetic disorders affecting Faroese work, they can then quickly summon citizens most at risk to the hospital to commence treatment.

For instance, ever growing cases of  carnitine transporter deficiency (CTD) are reported. The disease prevents the body from maintaining adequate levels of carnitine, which plays a critical role in metabolism. The disease most often is fatal, and the largest concentration of cases are found in the Faroe Islands, hundreds of times higher than in neighboring regions.

Last year, the country’s Ministry of Health launched an extensive program aiming  to sequence the genome of every citizen who wants it, focusing most on those with CTD, along with other conditions, such as schizophrenia, cystic fibrosis and diabetes.

“I don’t call it inbreeding, but line breeding,” says Gudrid Andorsdottir, who runs the biobank. “There is the implication that you are strengthening some factors, rather than inbreeding, which is a more negative word.”

The local government takes this very seriously and currently has one of the most extensive genetic records in the world.  The Genetic Biobank has finished digitizing the past 200 years of genealogical histories, and when combined with an almost complete population genome sequence, the country might become in the future one of the first at the forefront of the medicine of the future – a future in which every citizen has his own extremely personalized treatment, with the right dosage and medication calculated to extreme precision for maximum efficiency.

Indeed, this could save countless lives, but this also means that the government has or will have at least access to the DNA of every individual in the country. In a paranoia ridden world, especially considering recent whistle-blowing in the US that alleges a massive internet spying program in the US, this might not be the right precedent to set. If successful, Faroe Islands might be the pilot program that can spur other countries to apply similar methods. Then again, we’re speaking about a country made out of 18 tiny islands, and tiny as it is the program has already gobbled $50 million and will require hundreds of millions more of funding to decipher the meanings of the genomes. It will certainly not be just as easy for other countries in the world.