A study which monitored the health habits of 2,235 men over a 35-year period has found that exercise significantly reduces the risk of dementia.

It may seem like common sense, but it can never be emphasized too much: a healthy lifestyle ensures a longer… healthier life – it’s basically as simple as that. Published by researchers from Cardiff University, the study is the longest of its kind to probe the influence of environmental factors in chronic disease. They found 5 major behaviors that are crucial to a disease-free lifestyle: taking regular exercise, non-smoking, a low bodyweight, a healthy diet and a low alcohol intake. 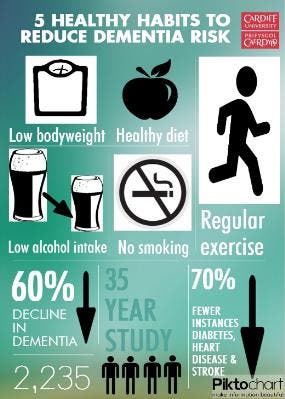 As the picture says, the people who follow at least 4 of these 5 behaviors experienced a 60 per cent decline in dementia and cognitive decline – with exercise being the strongest mitigating factor. Exercise alone ensures a 70% percent decline in diabetes and heart diseases.

“The size of reduction in the instance of disease owing to these simple healthy steps has really amazed us and is of enormous importance in an aging population,” said Principle Investigator Professor Peter Elwood from Cardiff University’s School of Medicine. “What the research shows is that following a healthy lifestyle confers surprisingly large benefits to health – healthy behaviours have a far more beneficial effect than any medical treatment or preventative procedure.

However, the survey they carried in Wales showed that less than one per cent of people in Wales follow a completely healthy lifestyle; on the other end of the spectrum, five percent of them follow none of these healthy habits – pretty worrying figures. Professor Elwood continued, explaining what a huge impact positive changes could have: 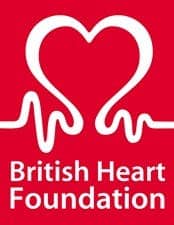 Just to make it clear – studies such as this one are not redundant. As I already said, people need to be shown, as much as possible, that a healthy lifestyle is incredibly important and can never be understated. There are so many things that we used to take for granted as a “normal part of aging” – now we know that things don’t necessarily have to be that way.

“The results of this study overwhelmingly support the notion that adopting a healthy lifestyle reduces your risk of cardiovascular disease and dementia. These findings will hopefully go a long way in encouraging people to carefully consider their lifestyle and how it will impact on their health in later years.”