Drinking energy drinks is like bathing your teeth in acid

Energy and sports drink do give you a quick rush when you might feel like nothing else can do the trick for you – but at a huge cost. Aside from all the other downsides, which include heart and stomach issues, researchers have now shown that people who drink this kind of drinks are essentially ‘bathing their teeth in acid’. 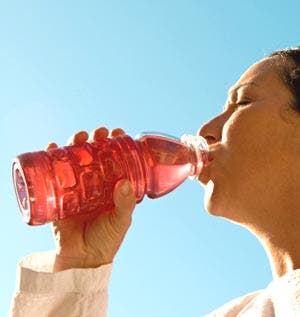 The study, published in the May/June 2012 issue of General Dentistry, examined the acidity levels in 13 sports drinks and nine energy drinks to see how the drinks would impact a tooth’s enamel; the enamel is the hardest and most highly mineralized substance in the human body, protecting your teeth as much as possible. But even it can’t protect your teeth from everything. As researchers note, acidity levels vary between different brands, as well as between certain flavors of the same brand. In order to test what these drinks do to human teeth, they immersed tooth enamel into the drinks for no longer than 15 minutes, followed by an immersion in saliva for two hours, four times per day, over a five day period.

Arguably, this might not be the most accurate way of testing what these drinks do to you in reality, but it simulates what heavy drinkers face on a pretty even level. What they found was that even after only five days of such exposure, significant enamel damage was present, especially in the case of energy drinks, which were twice as harmful as sports drinks.

Perhaps just as worrying, is another report released by Dr. Poonam Jain, director of the community and preventive dentistry program at Southern Illinois University in Edwardsvill, who declared most people aren’t even aware of the dangers such drinks pose to their health. That’s especially true for teens – between 30 and 50 percent of teens have reported consuming energy drinks and up to 62 percent of teens saying they drink at least one sports drink per day, she said, in the startling study.

“Young adults consume these drinks assuming that they will improve their sports performance and energy levels and that they are ‘better’ for them than soda,” Jain said in the statement.

So what can be done? Nothing much, really. Common sense tips go a long way here (washing your teeth, visiting the dentist regularly, etc), but if you drink energy drinks, your teeth will suffer.