How Dinosaurs could help us fight Malnutrition

Who doesn't love dinosaurs? Well sure, there's these guys, but rational people love dinosaurs, right? Well, Nathan Myhrvold, an inventor and Microsoft's former CEO sure does, and he believes that dinosaurs might actually help us fight malnutrition. Here's how:

Who doesn’t love dinosaurs? Well sure, there’s these guys, but rational people love dinosaurs, right? Well, Nathan Myhrvold, an inventor and Microsoft’s former CEO sure does, and he believes that dinosaurs might actually help us fight malnutrition. Here’s how: 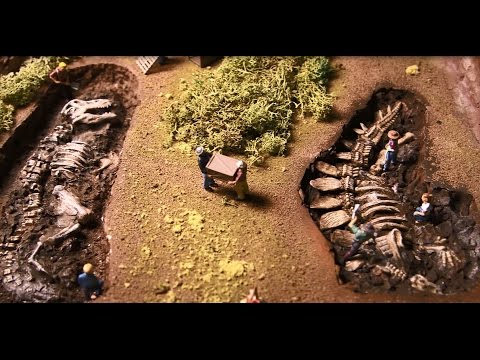 Dinosaurs are very hard to study, especially in terms of physical development, because we don’t have that many fossils of them; well, we do have many dinosaur fossils, but compared to the timespan they ruled the Earth (160 million years), there’s not so many – not many enough to paint a clear picture. T-Rex for example is known only from 30 fossils, and he’s the most famous dinosaur.

So while we know quite a lot about them, their overall physical development is still a matter of debate; surprisingly, the same thing can be said about children, especially in the poorer areas of the world – there are still many things we don’t know about their physical development.

The problem is that measuring and quantifying child development is also a difficult task; trying to find the height of a crying or squirming child is never easy, but the real problem comes in pinpointing the cause for underdevelopment. Is the child short because he’s malnourished, because he has a genetic condition, because he hasn’t hit his growth spurt yet, or simply because he’s short? That kind of question is very important to answer, but just like with dinosaurs, the data is not satisfying; with children it’s messy, with dinosaurs it’s sparse. But Nathan now believes he has found a better way to gather and analyze child growth data.

Despite not being especially known for this, Nathan is actually not a stranger to analyzing statistical data. When researchers recently looked at the relationship between gross domestic product and childhood stunting and, to everyone’s surprise, they found no correlation—until Nathan pointed out that they were using the wrong statistical methods to analyze the information. The methods he suggested instead—based on his work on dinosaurs—showed that the relationship was actually even stronger than many people in the field had thought.

We need this type of paradigm shift; we need researchers from various fields to interact more and share their knowledge and cooperate with each other – children all around the world suffering from malnourishment need it too. Taking scientific advancements from several fields and using them to benefit mankind is something we’d all like to see.

You can watch a video of Nathan presenting his work in detail here.