by Tibi Puiu
in Diseases, Health & Medicine, Mind & Brain
Reading Time: 4 mins read
A A
Share on FacebookShare on TwitterSubmit to Reddit

There’s an extremely fine line between delusion and grand vision – it’s enough just to take a look back in history and you’ll find a myriad of examples where great minds who justly challenged the status quo were labeled insane, and in some even more unfortunate times, heretics. That’s not to say that behind every conspiracy theorist or person who emits extreme, upside-down hypotheses lies on man of genius or great foreseeing. Much of the time, these are truly simple delusions – erroneous views on the world and how it works. A new study addressed how delusions work and how people who have them ‘see’ the world. The findings are most interesting: according to researchers at Yale University in New Haven, Conn, the delusional mind actually perceives the world in a manner different from what  most would class as real.

“Beliefs form in order to minimize our surprise about the world,” said neuroscientist Phil Corlett of Yale University in New Haven, Conn., who was not involved in the study. “Our expectations override what we actually see,” Corlett added. 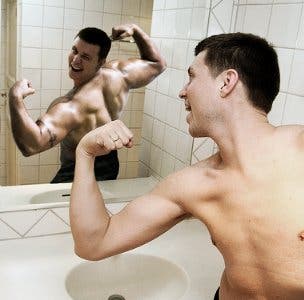 In other words, our beliefs are guided and formed by our perception. If we perceive something – an event, a concept, even a way of life – differently than our minds predicted it should be, then we generally change/update our belief. What we see or what we understand of certain events is extremely subjective, and some folks are prone to forming delusions. The Yale University researchers found that people who form delusions typically do not distinguish correctly among different sensory inputs.

This is why some people suffer from extreme cases of paranoia, constantly feeling they’re being watched or persecuted. Others have inflated ideas about one’s selves, believing they’re  in much greater position than they actually are. Nevertheless, the researchers conducted a series of experiments to test how delusions form and how these work in the brain.

Seeing the world though different eyes

First off healthy volunteers, with no mental health problems, were recruited and asked to fill in a questionnaire that measured how delusional they were. Questions included: “do you ever feel as if people are reading your mind?” “Do you feel there’s a conspiracy against you?” and even “Do you feel like your partner may be unfaithful?”.

Next, the study participants were asked to perform a task that tested their visual perception. A sphere-like set of dots would rotate in an ambiguous direction, and participants had to report which direction they perceived the dots were heading towards at various intervals. People who scored high on the questionnaires  saw the dots appear to change direction more often than the average person, suggesting what other similar studies had already found as well: delusional individuals have less stable perceptions of the world.

In a second experiment, participants were offered ‘special glasses’ which they were told would bias their view so that the rotating dots would appear to go in one direction more often than the other direction. This was simple trolling the scientists’ part, if you will, since these were nothing but ordinary glasses. The same experiment as in the first part was played, but in two phases: in the learning phase, where dots clearly rotated in one direction and a test phase, where the direction was ambiguous.

The participants reported they were seeing the dots rotate in the biased direction even in the test phase, when clearly didn’t happened. They clung to the delusion that the glasses altered their vision, even though the visual evidence contradicted this idea, suggesting they used their delusional beliefs to interpret what they were seeing.

In a third try, the same experiment was once again repeated but this time participants had brain scans done on them using fMRI. Brain imaging revealed that as people were deluded about the direction of the dots’ rotation, their brains were encoding the delusion as if they had really seen the dots move that way. Otherwise said, these people weren’t ignoring or actively denying what they saw – they were genuinely seeing/perceiving something else. Scans also revealed links between a brain area involved in beliefs, the orbitofrontal cortex, and an area involved in visual processing, the visual cortex.