I love chocolate, and to be frank, I don’t really care if it goes directly to my hips or not, but millions of women and men all across the world believe differently. For them this study is godsend. 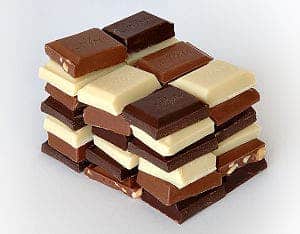 A research letter published by the Archives of Internal Medicine showed that healthy people which exercise regularly and eat chocolate tend to have a lower body mass than those who keep the rich sweets off their table. The survey analyzed over 1000 adults, aged 20 to 80, who on average exercised once every two days and ate chocolate twice a week, and those who ate chocolate more than the average tended to have a lower ratio of weight over height.

“Adults who consumed chocolate more frequently had a lower BMI than those who consumed chocolate less often,” said the study led by Beatrice Golomb and colleagues at the University of California San Diego. “Our findings — that more frequent chocolate intake is linked to lower BMI — are intriguing,” she added, calling for more detailed research and perhaps a randomized clinical trial of chocolate’s metabolic benefits.

However, experts urge for moderation, especially before establishing a well-understood pattern.

“Before you start eating a chocolate bar a day to keep the doctor away, remember that a chocolate bar can contain over 200 calories which mostly come from saturated fats and sugar,” said Nancy Copperman, director of Public Health Initiatives at the North Shore-Long Island Jewish Health System in New York. “Consider limiting your chocolate fix to a one ounce (28 grams) portion of dark chocolate or adding cocoa powder which is very low in fat to your food once a day,” said Copperman, who was not involved in the study.