by Tibi Puiu
in Chemistry, Health & Medicine, Technology
Reading Time: 3 mins read
A A
Share on FacebookShare on TwitterSubmit to Reddit 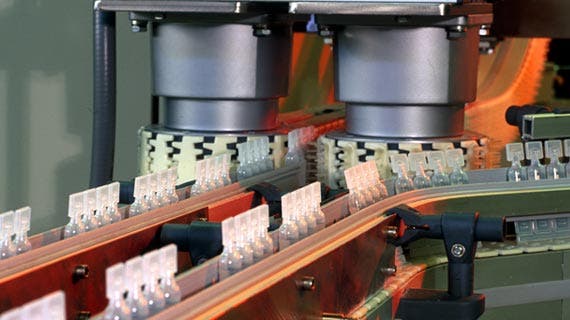 Henry Ford’s Model T automobile changed not only the way the average American traveled (the first trully affordable vehicle for the middle class), but the way industry in all its forms viewed production. By switching from hand craft to the assembly line, Ford drastically cut cost and speed of production of his automobiles, a model that was subsequentely applied for virtually all consumer goods. The pharmaceutical industry, despite relying on a mass production of medicine system as well, is far from the same level of efficiency and productivity other industries exhibit. This is because the technological flux of producing medicine isn’t continuous. Instead, most of the world’s billions of capsules filled with various substances, vaccines and so forth are produced in batches.

At the 246th National Meeting & Exposition of the American Chemical Society (ACS), some 7,000 papers were presented on new advances in science and other topics. Bret E. Huff of Eli Lilly and Company, a major pharmaceutical company from the US, was also present and shared one of the most interesting presentations at the event.

“The difference between batch and continuous processing is somewhat like the difference between a ferry boat and a bridge for getting cars and people across a river,” explained huff. “A ferry moves cars across a river one batch at a time. A bridge provides a continuous flow of cars across the river. A bridge is typically open, with the flexibility to meet demand, without having a line-up of cars waiting for the next trip across.”

Traditionally, medicine is made batch by batch. Ingredients typically undergo a series of batch-wise reactions with isolation of solid intermediates before finally being isolated and drummed into bulk containers. The active pharmaceutical ingredient then moves on to the next step, processing into a granular form, followed by collecting into bulk containers. The processing continues through drying and other stages before being compressed into tablets and coated. During the process, inevitably some ingredients are wasted at each step, besides other machine related and production inefficienties.

There are many disadvantages to working in batches. First of all, it’s very time dependent as a batch may typically take days to weeks to complete. In the meantime, if a new order is placed or if production needs to be cut down, the pharma plant managers need to adjust at the next batch, current production being out of their hands. A continuous technological flow for medicine production would solve a number of hurdles currently facing the industry, however in the past this wasn’t technologically feasible. Companies risked altering quality, purity and safety of their drugs.

Huff argues that it is now possible to easily implement continuous mass production of medicine, incorporating all aspects of medicine fabrication in one continuous and, best of all, flexible production akin to assembly-line production. This also includes quality-control testing and other monitoring operations that can be fully integrated into the continuous-flow operation.

Most likely, not all drugs can be produced in a continuous-flow operation, but according to Huff most of them could – at least the popular ones, currently prescribed to billions of people accross the globe. Drug manufacturing costs could see a dramatic cut, as both production time and losses are significantly lower. Whether this also translates to a reduced cost for the end consumer is a different side of the problem.