by Tibi Puiu
in News, World Problems
Reading Time: 3 mins read
A A
Share on FacebookShare on TwitterSubmit to Reddit

In response to the 9/11 terrorist attacks, the Bush administration launched a counter-offensive which went on to be known as the “War on Terror” and saw the US wage war in Afghanistan, Iraq, and most recently Syria. The WoT was initiated, in theory at least,  to eliminate the threat from al Qaida’s leader, Osama bin Laden, and as a long term goal to reduce terrorist threats as a whole. Thirteen years and a couple trillion dollars later, here’s where we stand against terror: in 2013 there were nearly 10,000 terrorist attacks worldwide or nearly seven times more than in 2000 when 1,500 terrorist activities were reported, according to the  Global Terrorism Index.

Sixty percent of attacks last year occurred in Iraq, Afghanistan, Pakistan, Nigeria and Syria. The same countries saw eighty percent of the total number of people killed by terrorist attacks in 2013. After two wars that destabilized a whole region for more than a decade, is anyone surprised about all this? Just so we’re clear, we have a country, the United States, which through its foreign policy has publicly vowed to tackle terrorism, but in the process has done nothing but promote terrorist activity. Does anyone sense something wrong in all this?

According to the report, terrorism is “the threatened or actual use of illegal force and violence by a non-state actor to attain a political, economic, religious, or social goal through fear, coercion, or intimidation.”

In 2013 terrorist activity increased substantially with the total number of deaths rising from 11,133 in 2012 to 17,958 in 2013, a 61 per cent increase. Over the same period, the number of countries that experienced more than 50 deaths rose from 15 to 24. This highlights that not only is the intensity of terrorism increasing, its breadth is increasing as well.

Since 2000 there has been over a five-fold increase in the number of deaths from terrorism, rising from 3,361 in 2000 to 17,958 in 2013. The majority of claimed deaths from terrorist attacks, 66 percent in 2013, are claimed by only four terrorist organisations; ISIL, Boko Haram, the Taliban and al-Qa’ida and its afliates.  The following graphs come directly from the report. I took the liberty of sharing those which I found most interesting with you: 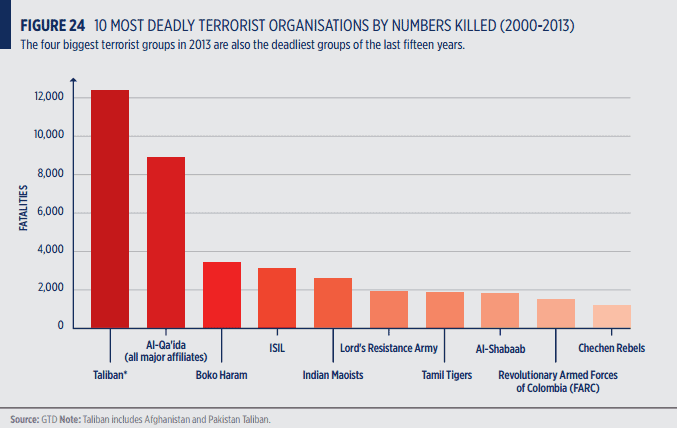 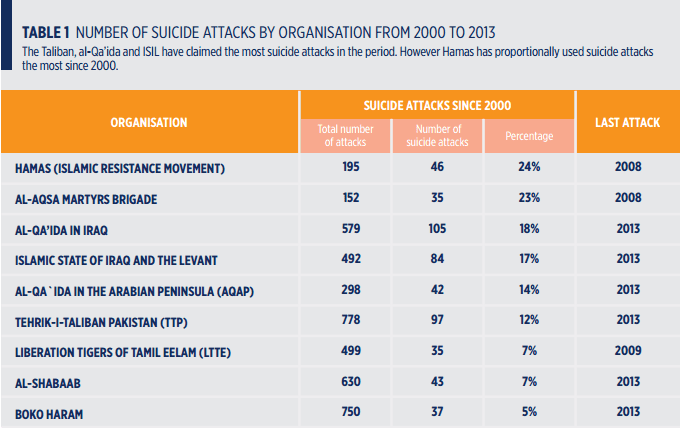 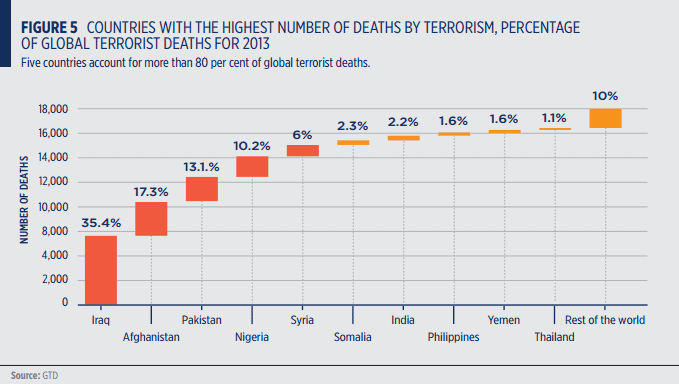 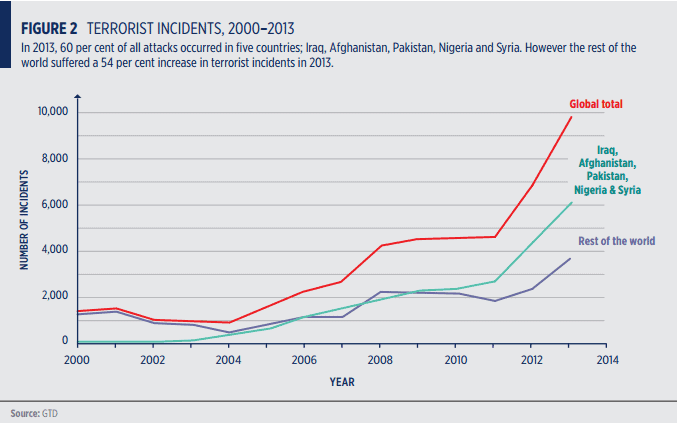 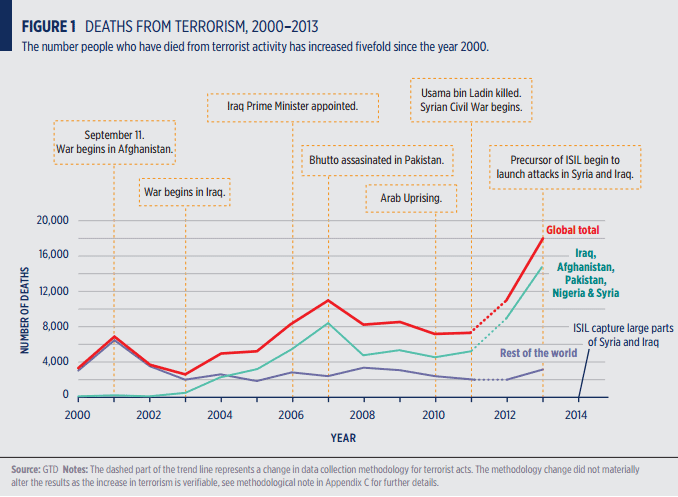 It’s true, however, that there aren’t that many terrorist attacks in developed countries. The report looked at “black swan” event –  2011 Norway attack, the 2004 Madrid
bombings, the 2005 7/7 London attacks and September 11 – and found that a person is 40 times more likely to be murdered than die from a terrorist attack.

A recent study published by researchers at Harvard’s Kennedy School found the Iraq and Afghanistan conflicts, taken together, will be the most expensive wars in US history – totaling somewhere between $4 to $6 trillion. This includes long-term medical care and disability compensation for service members, veterans and families, military replenishment and social and economic costs. The largest portion of that bill is yet to be paid.