Mollusks such as oysters, clams and scallops are highly vulnerable to the increasing acidification of the world's oceans. A new study concluded that the acidification is so intense that the mollusks aren't able to properly produce a hard shell, putting them in peril.

by Mihai Andrei
in Animals, News, World Problems
Reading Time: 4 mins read
A A
Share on FacebookShare on TwitterSubmit to Reddit

Mollusks such as oysters, clams and scallops are highly vulnerable to the increasing acidification of the world’s oceans. A new study concluded that the acidification is so intense that the mollusks aren’t able to properly produce a hard shell, putting them in peril.

Mollusks are the largest phyllum of invertebrate marine animas; 1 in 4 marine animals is a mollusk. Mollusks like oysters generate a calcium carbonate shell which surrounds and protects their bodies. Under normal conditions, they don’t dissolve – well, technically speaking they do, but slow enough so that oysters can continuously generate enough calcium carbonate. But here’s when you add carbon dioxide (CO2) to the water (H2O) and calcium carbonate(CaCO3), they simply aren’t able to form their hard shell. Here’s what happens from a chemical point of view:

The calcum starts to dissolve, and therefore the oysters’ shells start to dissolve. So When we’re spewing out greenhouse gases like carbon dioxide, we’re making our oceans more acidic, and this is destorying marine wildlife. In other words, ocean acidification makes it harder and harder for shellfish to form hard structures, making them vulnerable, especially in their larval stages.

Today, the world’s oceans are absorbing carbon dioxide at an unprecedented rate and the resulting acidification is reaching alarming levels – that’s the conclusion of a study published today in the peer-reviewed journal Nature Climate Change. The study analyzed the situation in shellfisheries across the US.

According to the study, previous models, which stated that acidification caused by carbon dioxide in the atmosphere will not affect the local oyster crop until 2100 are wrong – they haven’t taken into consideration river runoffs and algae blooms – and those are significant factors. It’s also not only carbon we have to worry about – other greenhouse gases can have significant negative effects too.

“Messages from global models to date are that the Gulf will experience changes later on, but with these other local factors enhancing it, things can be moving at a much shorter timeline than that,” said Sarah Cooley, the Ocean Conservancy acidification program’s science outreach manager and a co-author of the study.

This is the first nationwide vulnerability assessment, and aside for the environmental damage, the economic damage is also huge – millions of dollars and hundreds of jobs are lost every year due to ocean acidification.

“Ocean acidification has already cost the oyster industry in the Pacific Northwest nearly $110 million and jeopardized about 3,200 jobs,” said Julie Ekstrom, who was lead author on the study while with the Natural Resources Defense Council. She is now at the University of California at Davis.

Scientists reviewed data from multiple fields, and managed to identify which are the most vulnerable areas in the US: 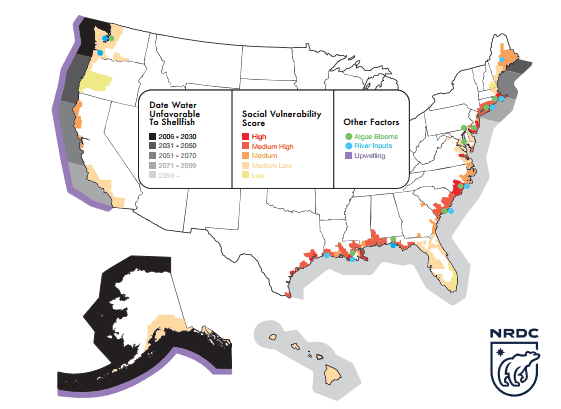 The study shows just how vulnerable marine wildlife really is – and as we continue to emit more and more greenhouse gases, the oceans will become more and more acidic, and the problem may spiral out of control. This is a problem we have to deal with, and deal with fast.

“There’s not a lot of room for error,” said Mike Rice, professor of fisheries and aquaculture at the University of Rhode Island, who was not associated with the report.

However, no matter how much we improve our resilience and how many adaptation strategies we implement, the bottom line is the same – as long as we continue to emit greenhouse gases, the problem is only going to get worse. From an economic point of view, the situation is even more acute – 95 percent of the U.S. shellfish revenue comes from only 10 species, and we don’t know how those species will react to the new conditions.

“We need a fuller understanding of those species to understand the economic impact,” Ekstrom concluded.

You can read the full scientific article, for free, from the link below.

Journal Reference: Julia A. Ekstrom et al. Vulnerability and adaptation of US shellfisheries to ocean acidification.