by Tibi Puiu
in Environmental Issues, News, Pollution, Science
Reading Time: 3 mins read
A A
Share on FacebookShare on TwitterSubmit to Reddit

Chemists at University of Toronto report a new greenhouse gas has been added to the roster – perfluorotributylamine, or PFTBA. Like other compounds in its class, PFTBA is a frighting good heat absorbent but nobody was expecting, however, for it to be 7,100 times more powerful than carbon dioxide in terms of the effects one molecule has on global warming. Luckily, PFTBA, which is used in the electronics industry and is non-natural occurring, is present in extremely low concentrations in the atmosphere.  The study that reported the discovery of the compound acting as a greenhouse gas shows, however, that it’s important to better understand what are the exact contributing chemicals to global warming to better mitigate the situation.

Scott Mabury, an University of Toronto researcher, one day noticed while going through some chemicals in his lab that the chemical structure of PFTBA could make it a greenhouse gas. A team at the university decided to investigate. The scientists collected samples from the atmosphere and then performed a gas chromatograph to identify the separate components that  make-up the air. Mass spectroscopy eventually confirmed that there was PFTBA in the air. 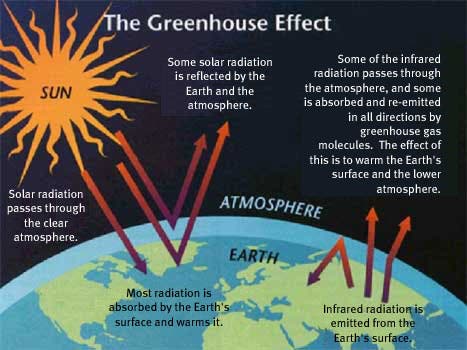 The researchers found that PFTBA is a real gourmet for heat. In fact, PFTBA has the largest molecule heat-absorbing capacity, or radiative efficiency, out of all greenhouse gases. Because of its carbon-fluorine bonds, the compound can absorb infrared light (heat) in a particular part of the energy spectrum called the atmospheric window. As it wasn’t enough, PFTBA molecules say in the atmosphere for 500 years, so in a century only one molecule of PFTBA should be equivalent to the warming caused by 7100 CO2 molecules.

“[The atmospheric window] is the region where few other compounds in the atmosphere absorb, and that’s where most of the heat from the earth normally escapes,” says Cora Young, a chemist at Memorial University, in Newfoundland, who was a lead author on the recent study. “These compounds that contain a lot of carbon-fluorine bonds, like perfluorotributylamine, absorb in this region, and that’s why they are such potent greenhouse gases.”

Concentration in parts per trillion, though

Alarming as PFTBA may seem, there isn’t that much need for worry. Analysis showed that the greenhouse gas exists at 0.18 parts per trillion in the atmosphere or a concentration 10 billion times smaller than that of CO2. Way too low to cause any kind of damage any time soon, still the discovery suggests that there may be other greenhouse gases that should be investigated as well. Currently, CO2, methane, nitruos oxide and water vapors are the leading greenhouse gases in the atmosphere – having a broad picture of all the components that contribute to global warming, however, may help researchers better assess their mitigating efforts.

“This is a warning to us that this gas could have a very very large impact on climate change – if there were a lot of it. Since there is not a lot of it now, we don’t have to worry about it at present, but we have to make sure it doesn’t grow and become a very large contributor to global warming.”

Findings were reported in a paper published in the journal Geophysical Research Letters.