Millions of dead fish wash up on the coast of Brazil 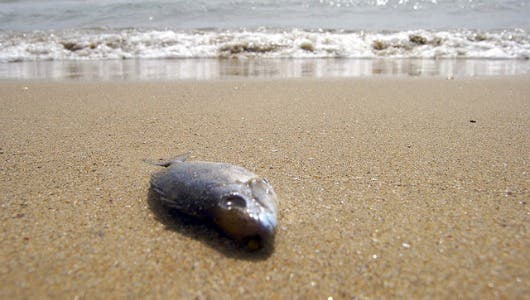 Another mystery, even bigger than the one with the birds in Arkansas is puzzling researchers from all over the world, as dead fish hit the coast of Brazil, with CNN reporting that there are over 2 million dead fish in Chesapeake Bay. Experts have first suggested that this is probably caused by a combination of cold water stress and too large populations, but the theory is largely unsatisfying.

Maryland Department of the Environment made a press release about the topic, but provided little extra information:

“The affected fish are almost exclusively juvenile spot fish, 3 to 6 inches in length. [A recent survey] showed a very strong population of spot in the bay this year. An increased juvenile population and limited deep water habitat would likely compound the effects of cold water stress.”

Now I’m not sure what killed those birds, probaby something to do with firework, and I’m not sure what killed these fish; from nature’s point of view, these are indeed catastrophes. But too many people have started pointing towards an apocalyptic event, and “end of days” scenario. Birds falling from the sky is not nearly as uncommon as you think, and further analysis will provide insight on what happened to the fish. In the meantime, stop worrying about absurd ideas and start worrying about real problems.