Last year, 90% of the new energy in Europe came from renewables 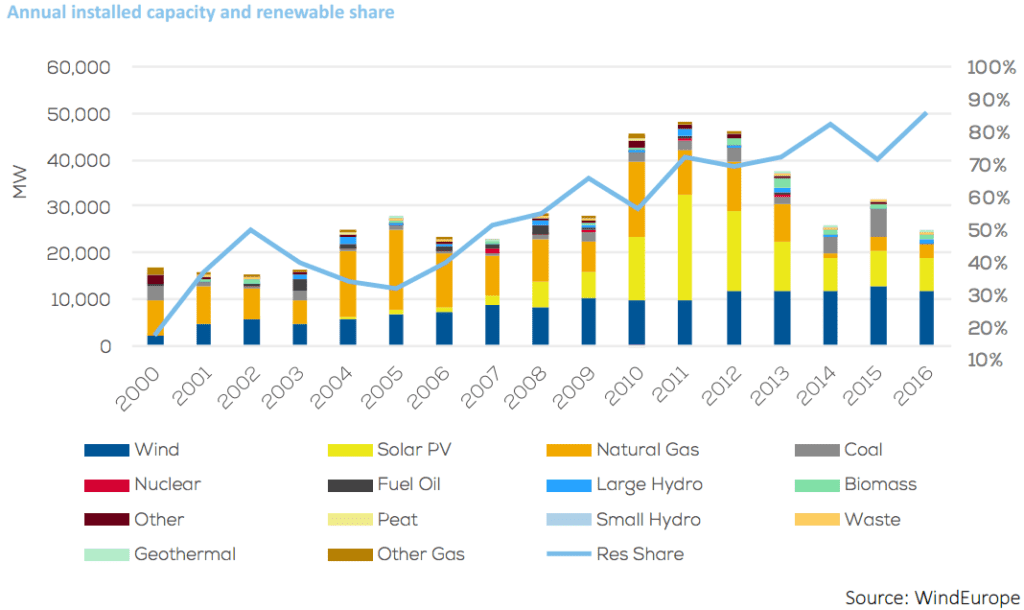 Thanks to countries like Germany, France, the Netherlands, Finland, Ireland, and Lithuania, wind energy was the main driver of energy increases on the Old Continent. Over 50% of the newly added energy comes from wind, making wind the second largest energy source in Europe, surpassing coal. Natural gas remains the biggest energy source — for now.

The growth is remarkable, especially when compared with that of the US, where only 63 percent of new energy capacity was from renewable sources. Germany installed the most new wind capacity in 2016, while France, the Netherlands, Finland, Ireland, and Lithuania all set new records for windfarm installations.

“The installation numbers for now look OK, and the investment number is very good,” said Giles Dickson, chief executive of WindEurope. “But on the longer term outlook, only seven out of the EU’s 28 countries have clear policies and volumes [for wind power] in place for the period beyond 2020.

“We today see less political and policy ambition for renewables than we did five or even three years ago, across the member states.”

But not everything is looking so bright. While economists are thrilled renewables, politicians are still reluctant to offer their support. Also, while Europe’s wind capacity is now at 153.7GW, it’s still just a small part of the continent’s 918.8GW of total power capacity. There’s still a lot of room to grow, and still a lot of work to do. Also, some countries such as Portugal, Spain, and Italy, which were big supporters of wind energy in the early 2000s, have recently backtracked on their commitments — despite them having excellent potential. Furthermore, growth across the continent has been largely unequal, which prompts worries about everyone doing their part.

Of course, this is just electricity we’re talking about. Industry and transportation are moving much slower, but there is also progress there. With the continuous technological development, the future looks bright. Europe doesn’t have politicians blatantly ignoring the science and economy of fossil fuels… or at least they didn’t put them in charge, like the US did. Hopefully, other countries won’t follow in the footsteps of the US in that regard.