At least 2016 was amazing for solar — 95% more solar power capacity came online than in the previous year. That’s almost 15GW

Solar is growing beyond expectations.

by Tibi Puiu
in News, Renewable Energy
Reading Time: 3 mins read
A A
Share on FacebookShare on TwitterSubmit to Reddit

Last year was sure both memorable and miserable for a lot of folks but that’s not to say it was devoid of positive milestones. Surpassing even the most optimistic expectations, the United States installed 95% more solar power in 2016 than in the previous year, according to the latest market report released by GTM Research and the Solar Energy Industries Association (SEIA).

What’s remarkable is that 2015 was itself a record-breaking year seeing 7.5 gigawatts (GW) of new solar coming online, which was 17% more than in 2014. But 2016 simply blew all expectations with 14,6 GW of new solar power or almost double than in the previous year. This momentum won’t stop too soon judging from the quarter to quarter progress registered in 2016. As ZME reported earlier, 4,143 MW of solar PV were installed in the U.S. during Q3’16, marking a 99% increase over Q2’16 and a 191% rise over Q3’15. One megawatt of photovoltaic power came online every 34 minutes in Q3’2016, which is enough to power 164 American homes on average. 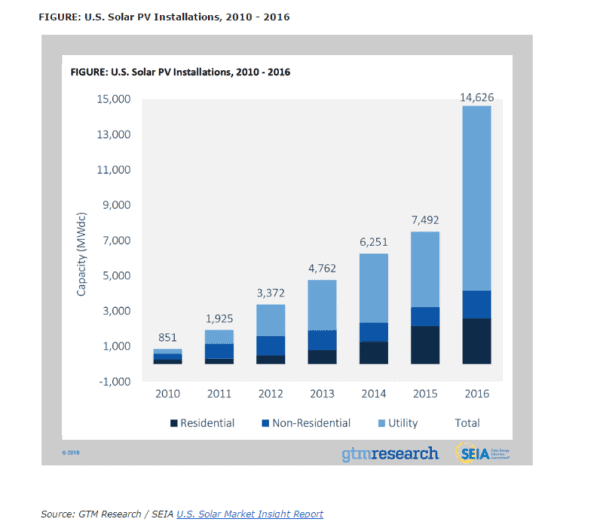 Five years ago, only 1.9 GW of solar of solar came online.

Officially, solar power was the leading source of new electrical generation capacity in the United States for 2016 representing 39% of new capacity across all power domains, be them wind, gas, nuclear or coal. 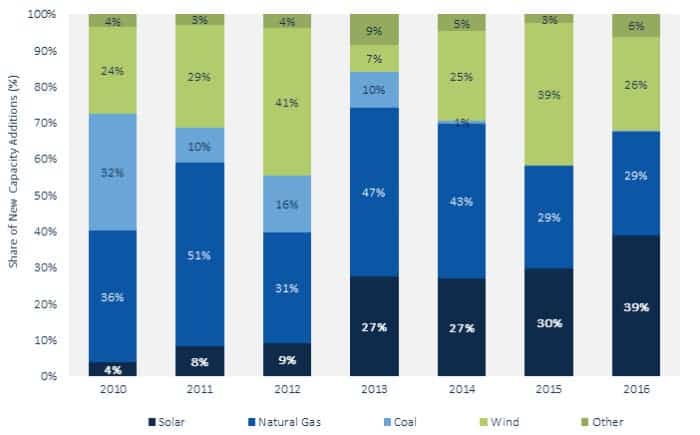 This huge influx of new solar capacity is worth billions in investments in an industry that now employs 374,000 people or almost double the number of jobs in electrical power generation from coal, gas, and oil.

“What these numbers tell you is that the solar industry is a force to be reckoned with,” said Abigail Ross Hopper, SEIA’s president and CEO. “Solar’s economically-winning hand is generating strong growth across all market segments nationwide, leading to more than 260,000 Americans now employed in solar.”

Another positive trend identified by the report is market diversification. GTM Research notes that 22 states added more than 100 MW of solar in 2016.

“In a banner year for US solar, a record 22 states each added more than 100 megawatts,” added Cory Honeyman, GTM Research’s associate director of US solar research. “While U.S. solar grew across all segments, what stands out is the double digit gigawatt boom in utility-scale solar, primarily due to solar’s cost competitiveness with natural gas alternatives.”

The bulk of the new 2016 solar capacity was came from utility-scale PV, which grew by 145% year-to-year, though residential solar also grew nicely. It remains to be seen whether 2017 can beat this boom seeing how many of last year’s huge projects were completed in advance out of fear that the U.S. Investment Tax Credit (ITC) would be dropped. It was extended, however.