Usually, whenever I hear about dumping things in the ocean, I just rage! I mean, there are over 5 trillion pieces of plastic in the ocean, some other trillion pieces are trapped in the Artic ice, ocean sediments are basically a cemetery for plastic and there's a garbage island twice as big as France in the Pacific Ocean! We really should start reducing the amount of garbage we dump in the ocean... and then there's these guys. 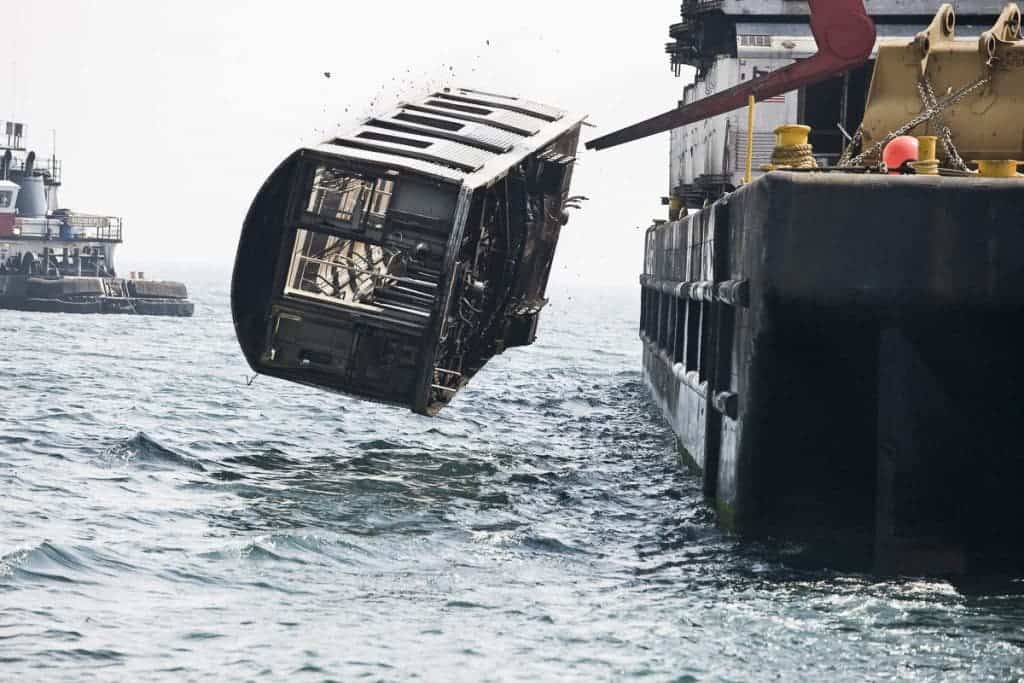 Usually, whenever I hear about dumping things in the ocean, I just rage! I mean, there are over 5 trillion pieces of plastic in the ocean, some other trillion pieces are trapped in the Artic ice, ocean sediments are basically a cemetery for plastic and there’s a garbage island twice as big as France in the Pacific Ocean! We really should start reducing the amount of garbage we dump in the ocean… and then there’s these guys. 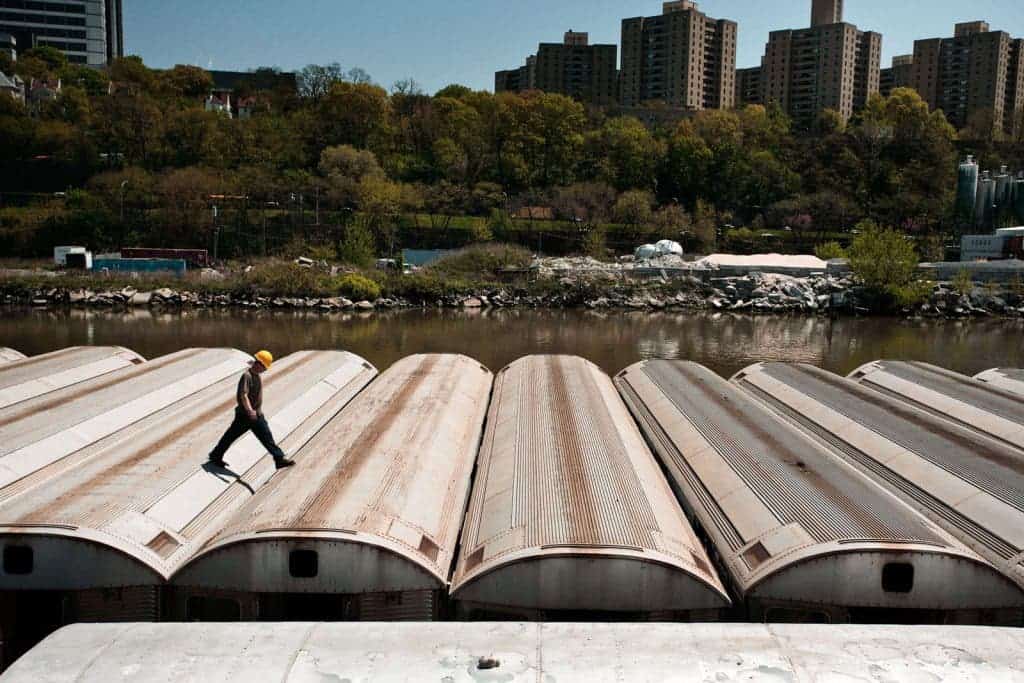 When you hear that New York’s municipality is simply dumping their subway trains in the ocean, you think about the worst. I have to admit I assumed the worst. But I was wrong – over 2,500 New York subway cars have been used to create an underwater reef for crustaceans and fish in the Atlantic.

Over a period of three years, photographer Stephen Mallon of the Front Room Gallery captured images of the carriages being taken out to sea and then dropped, there underwater creatures start to “take care” of them, transforming them into their new homes. His pictures are now displayed in an exhibition in New York. 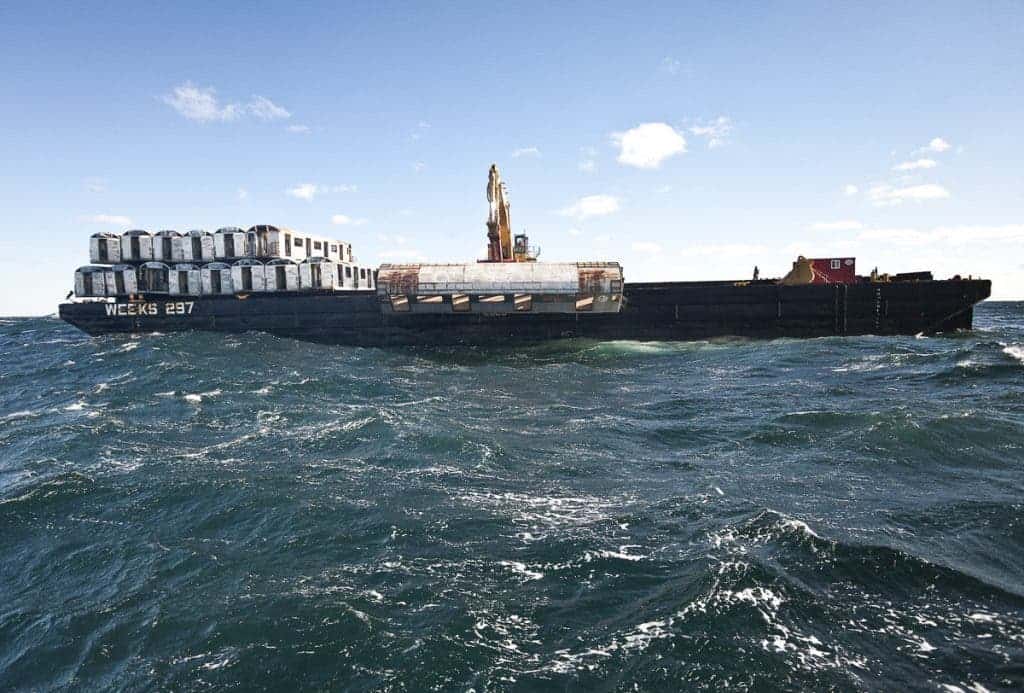 “I had read about the subway cars being dropped into the Atlantic, but I thought the project was over,” said Mallon. “Then in 2007 I was scouting for another shoot and saw the barges being loaded up.” 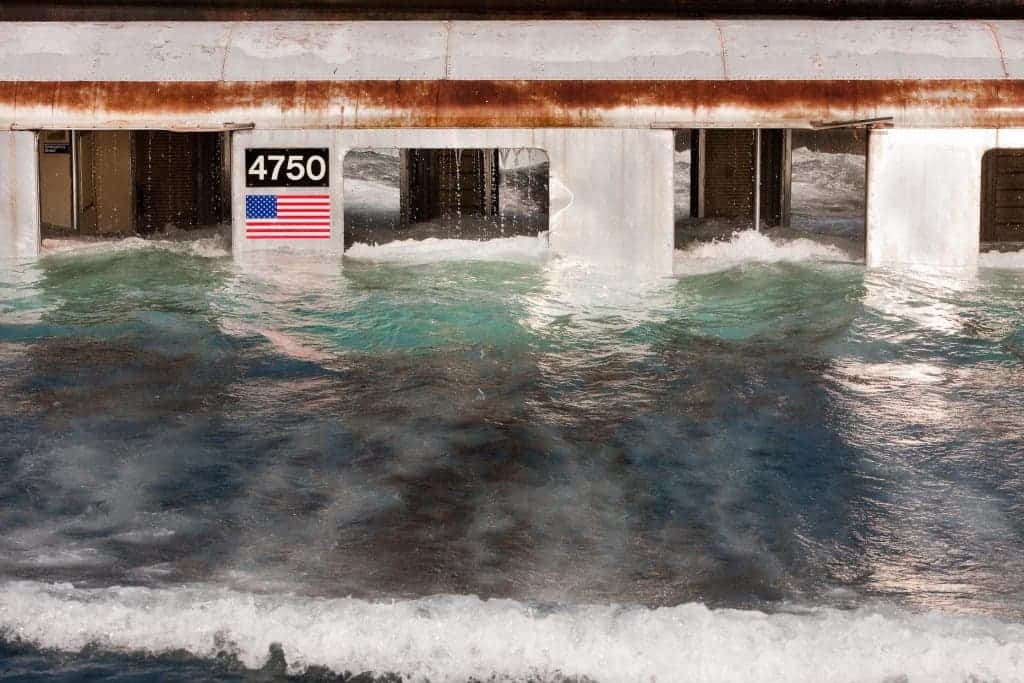 So, the way this happens is that first all the trains are stripped of anything that might still be useful or has value – chairs, wheels etc. They are then cleaned and stacked on a barge which transports then to the dropping point, where they are dropped with a hydraulic pump; this happened about once a month.

“I had never seen anything like this,” Mallon said. “And I’ve been in New York for over 20 years … there’s a sense of vertigo as they drop — you want to hold on as it falls.” The 42-year-old has an ongoing project entitled American Reclamation that explores the recycling industry in America.

Dropping sites are not disclosed to the public, but according to the subway authorities, they are constantly monitored and studied. So far, it seems they’re doing a great job at supporting marine wildlife – there’s an underwater penthouse boom.

“We’ve been monitoring the carbon steel subway cars and they are holding up well,” said Jeffrey Tinsman, artificial reef program manager at the Delaware Department of Natural Resources and Environmental Control.

“They are still three dimensional, and provide thousands and thousands of square feet of hard surface for invertebrates to live on, some of which, such as blue mussels, could not live on the sand bottom that is naturally there. When you compare the amount of food available on this reef to the natural amount, there is 400 times as much food per square foot as the sand bottom,” Tinsman continued. Fish such as black sea bass are not fast swimmers, so need structure to provide both food and shelter; they wouldn’t, for example, be able to outswim a shark, but they could duck into the shelter instead.”

Stephen Mallon’s works are featured in the solo exhibition Patterns of Interest at NYU’s Kimmel Galleries from February 6 to March 15. Initially, the photos make you think the authorities are doing something awful, and he does a great job at keeping the suspense up throughout the exhibition – it makes his work even more powerful.