A recent study led by WCS-India scientist Vidya Athreaya finds that certain areas in India, in which human settlements have greatly expanded, and which, as a result, are basically devoid of wilderness are teeming with another type of backyard wildlife: leopards. 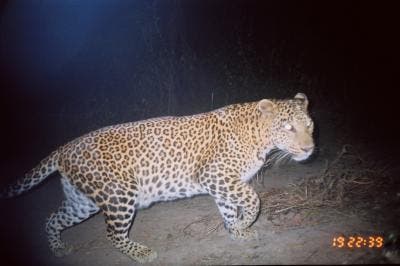 Camera traps set up at night in a densely populated region of India virtually devoid of wilderness revealed not only leopards, but also striped hyenas, jackals — and lots of people. This kind of thing has never been reported before, so what’s going on in there?

The study, called “Big Cats in Our Backyards,” appeared in the March 6 edition of the journal PLoS One, highlighting 5 different leopards just going about human settlements. But interestingly enough, the incidence of attacks is extremely low. The leopards are simply trying to adapt to their new environment, and so far, they’re doing a very good job, without posing much of a threat to humans.

Vidya Athreya and Ullas Karanth of the Wildlife Conservation Society and Centre for Wildlife Studies in Bangalore and their team say that the findings show that conservationists must look outside of protected areas for a more holistic approach to safeguarding wildlife.

“Human attacks by leopards were rare despite a potentially volatile situation considering that the leopard has been involved in serious conflict, including human deaths in adjoining areas,” said big cat expert Ullas Karanth of WCS. “The results of our work push the frontiers of our understanding of the adaptability of both humans and wildlife to each other’s presence.”

Something rather similar has happened in Romania, with bears instead of leopards. The bears, devoid of their natural habitats which were invaded by humans and lacking food, gathered around villages and touristic areas, some of them even starting to beg for food. From what I know, the impact of this behaviour has still not been documented properly, but it is already having some visible negative effects, on both human and animal.

You can read the entire study here.