Marine researchers back with news from underwater volcanic eruption

by Mihai Andrei
in Biology, Environment
A A 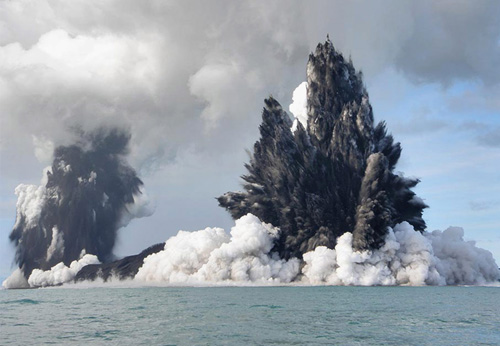 The researchers who have just returned from the underwater volcano eruption report that the volcano is still active and it has grown considerably in size in these past three years. It supports a unique ecosystem thrives despite the constant eruptions.

“This research allows us, for the first time, to study undersea volcanoes in detail and close up,” said Barbara Ransom, program director in NSF’s Division of Ocean Sciences, which funded the research. “NW Rota-1 remains the only place on Earth where a deep submarine volcano has ever been directly observed while erupting.”

“That’s as tall as a 12-story building and as wide as a full city block,” Bill Chadwick, Oregon State University (OSU) volcanologist and chief investigator says. “As the cone has grown, we’ve seen a significant increase in the population of animals that lives atop the volcano. We’re trying to determine if there is a direct connection between the increase in the volcanic activity and that population increase.”

The ecosystem includes some crabs, shrimps and barnacles, including some new species that have adapted to the physical and chemical conditions that would be toxic to normal species. One of these species is the Loihi shrimp.

“The ‘Loihi’ shrimp has adapted to grazing the bacterial filaments with tiny claws like garden shears,” said Verena Tunnicliffe, a biologist from the University of Victoria. “The second shrimp is a new species–they also graze as juveniles, but as they grow to adult stage, their front claws enlarge and they become predators.”

We’ll return with even more news on this.