Hungary: the toxic red sludge has reached the Danube

In case you don’t know, a few days ago a toxic red sludge “broke free” from a Hungarian metal plant reservoir, and the damage it has done is huge. Several people have been killed, over a hundred have been injured, and the damage done to the nearby houses and the environment is very significant. But things have just gotten a whole lot worse, because the sludge has now reached the Danube, Europe’s second largest river. 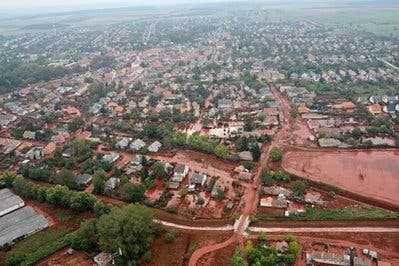 This is just what the EU and environmental officials have feared most from the beginning, because this catastrophe will probably affect half of dozen European countries, especially Serbia, Croatia, Romania and Bulgaria, countries the Danube passes on its way towards the Black sea. This can prove to be a major problem because fishing is one of the main activities in the cities around the river, and so many people rely on water from it.

The red sludge infested the Danube earlier today (Thursday) but Hungarian emergency spokesperson Tibor Dobson assured that the pH is now in normal levels and no dead fish have been spotted. Local officials from the above mentioned countries have declared that the pH is indeed within normal levels, but further tests have to be made in order to detect the presence of metals (especially heavy metals). This is also just the beginning, as more and more of the aluminum red sludge will end up in the Danube. 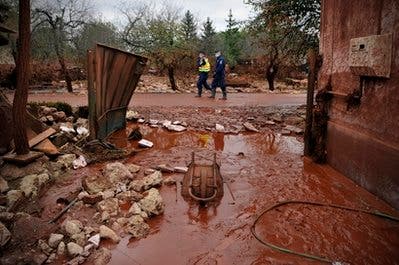 Angry villagers from near the factory gathered around the mayor’s office and claimed some sort of compensation because their whole community has been destroyed.

“The whole settlement should be bulldozed into the ground,” bellowed Janos Potza. “There’s no point for anyone to go back home.”

It is still not clear how the reservoir collapsed, alowing the toxic substances to flow; the sludge spill measures about 1 million cubic meters and environmentalists have declared it “one of the top three environmental disasters in Europe in the last 20 or 30 years”.

We will keep you updated as things continue to develop.

“Those who can, will move out of Kolontar. From now on, this is a dead town,” fumed Beata Gasko Monek.