Hamburg wants to become a car-free city in 20 years

by Tibi Puiu
in Environment, Green Living, Renewable Energy
A A 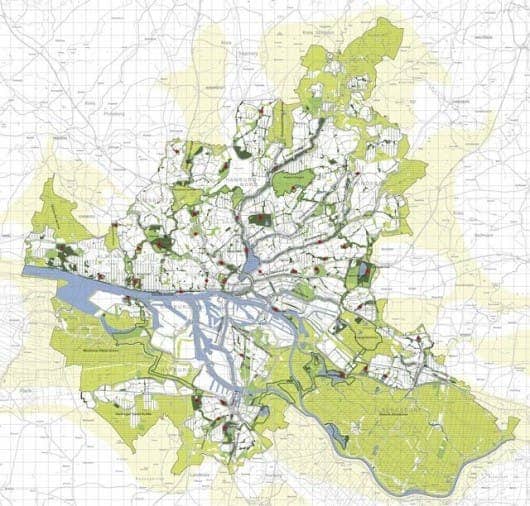 One of the most beautiful cities in Europe, Hamburg has embarked on an ambitious plan that aims to promote cycling and walking as the main means of transportation throughout the huge hub.  The local administration claims that within 15-20 years the city would have completed its green network that virtually connects any part of the city. Even animal inhabitants will benefit, as any critter that chooses to move through the network will be safe from being ran over.

Hamburg is already one of the most greenest cities in Europe. About  40% of the city’s surface is made up of green areas, cemeteries, sports facilities, gardens, parks and squares. The city is comprised of two major green hubs, one north and the other south. By completing a green network, all residents can enjoy access to nature and a sustainable commute.

“Hamburg has always been a green city with lots of parks”, notes Jens Kerstan, leader of the Green Party in Hamburg’s state parliament for the Guardian. “The green network makes sense from a climate change adaptation perspective, especially since our residents are quite progressive when it comes to climate change adaptation. Many Hamburgers are willing to give up their cars, which is very unusual in Germany.”

Residents of Hamburg are particularly aware of global warming and how it affect their lives in the future. Median temperatures of the past 60 years have risen to 9 degrees Celsius, marking a change of 1.2 degrees Celsius. A bristling port city, Hamburg relies a lot on its North Sea trade routes. Sea level has risen by 20 centimetres over the past 60 years, and they’re expected to jump by another 30 to 110 centimetres by 2100.

Besides curving their emissions and making their own contributions to dimming global warming, the administration also has their residents’ health in mind.  Given that residents – especially children, the elderly and the ill – will suffer when temperatures rise, making the city climate as comfortable as possible is “very important in order to provide quality of life for our residents looking ahead to 2050”.

Hamburg “envisions a network that doesn’t just help residents get from point A to point B in a sustainable fashion,” with city spokesperson Angelika Fritsch adding “It will offer people opportunities to hike, swim, do water sports, enjoy picnics and restaurants, experience calm and watch nature and wildlife right in the city. That reduces the need to take the car for weekend outings outside the city.”

There’s a growing trend that sees big metropolitan centers in Europe trying to curve their emissions. The best example is Copenhagen, which is building 26 bicycle “superhighways,” that extend out from the city center as part of the city’s goal to become carbon neutral by 2050.