Liquid air could be used to store renewable energy

by Tibi Puiu
in Green Living, Renewable Energy
A A

Renewable energy sources, like wind and solar, are gaining ground fast against fossil fuels in terms of energy production, but unfortunately not that fast as we’d hoped for. One big obstacle in the way of renewable energy is storage. A refined look at an older idea that dates back from the XIX century seeks to address this issue. Namely, engineers are currently entertaining the possibility of using liquefied air as an energy storage medium.

Using electricity to cool down air to about 200 °C below zero, air enters its liquid form. When its energy needs to released, it is just allowed to warm. The air’s expansion can be used to drive a steam turbine and generator to produce immediate useful electricity.

When the idea was first proposed by inventor Charles Tripler around the 1890s it garnered a great of attention from the press of the time. Many investors flocked and handed out money to see the project rise, however, Tripler wasn’t entirely honest about his process and the concept proved to be so inefficient that it brought many men to bankruptcy.

The new refined system is developed by  Highview Power Storage of London, which has already raised $18 million for a prototype plant, in collaboration with  Messer, the large industrial gas company.

Using modern technology, the process has been refined to the point where it is nearly 50 to 60 percent efficient – that’s to say that it can output half of the electricity that goes in to cool the air. Batteries are 90% efficient, however the liquid air can be tapped using low-temperature waste heat from power plants or even data centers can be used to help warm up the liquefied air. The system can also last for decades, while batteries typically need to be replaced every few years or so, further reducing overall costs in the long run.

The process follows a number of stages:

Perhaps the biggest shortcoming of solar and wind power is their intermittency, and since they can’t supply power that is available on demand (firm power) they must be backed up by power sources that can provide power when the sun isn’t shining and the wind isn’t blowing. In the near term, natural-gas power plants and fast-responding storage technologies such as batteries can keep the grid stable, which is how they’re used today, however these aren’t efficient in the longrun. You need something with a high energy density, that is long lasting and cheap.

“When we’re looking at energy storage mechanisms, we’re looking for something that’s based on extremely low-cost materials and very simple processes we can do in bulk,” says Haresh Kamath, program manager for energy storage at the Electric Power Research Institute. “And this certainly fits the bill.”

If the liquefied air pilot plant run well enough, the UK government will most likely fund a larger system. It certainly looks promising.  Meanwhile, the engineering consultancy Ricardo is developing two types of engines that could use liquid nitrogen, based on technology from a Highview Power spinoff called Dearman Engine. 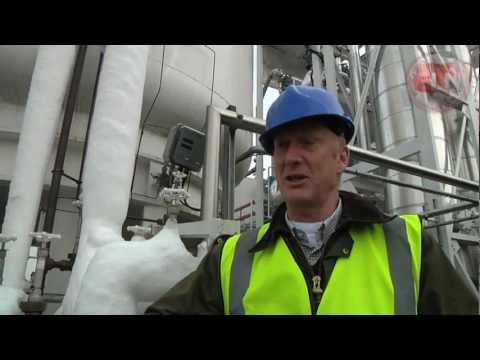